Is the new Dharma a continuation of the old DHARMA or is it a new organization?

Should we post the New Dharma logo that appeared at the end of the Damon and Carlton Dharma Initiative Lost video(Announcement 3) from dharmaspecialaccess.com under "Other stations"? As the Dharma email from Damon and Carlton states "Why, it looks like a first-look at an as-yet-unseen Dharma station logo".

Note that some of the stations have names related in some way to the stories of Apollo in Greek Mythology. Apollo was born on the island of Delos which at the time floated freely in the ocean and was difficult to reach because of swirling tides surrounding it.

shouldn't this be deleted as it's a theory? TPTB have never said anything to point to a theme in the DHARMA station names. even if there was a theme, wouldn't the writers have used it exclusively. The Looking Glass is definitely not an Apollo reference. --Gluphokquen Gunih ▲ 16:14, 1 February 2009 (UTC)

why do you think the oil rig thing is bull? they have some very highly qualified people like Dr. Chang -- do you think he's just getting a small pension? Not usually easy to fill "workman" jobs with native English speakers in faraway places like Greenland or Pago Pag. wfz

Since the Dharma Recruiting Project is now offically not canon, shouldn't all references to it be put in the notes or trivia section? The paragraph at the top of the page seems especially out of place, talking about how Damon and Carlton own the Dharma Initiave is clearly not canon stuff. --D Toccs 12:21, 15 May 2009 (UTC)

The circle of trust gets pretty big starting at Hurley and then side characters leading up to "several unnamed construction workers". The only time I remember that phrase being explicitly used is by Horace to Miles in Some like it Hoth but I'm unclear as to whether it was a phrase Horace was using loosely or if that's something more official since later when Miles tells Radzinsky that's he's part of the circle of trust he just shouts at him to get out. Mister vijay 02:35, 21 May 2009 (UTC)

Does anyone know what is the font that they use for their stuff (like the ones at the Swan or the food drop)? It's pretty nondescript, kind of arial-like. Is it already existing or did they make it?

Hi, I undid a recent version of the page by LOST-The Cartographer, who removed an ua about how the truce came about. I think the op was talking about the original, pre-LaFleur truce that existed between the hostiles and DI, the one that was broken at the beginning of La Fleur. It was too small to put in a summary, so I leave it here. Bwanartalk|contrib 23:23, November 28, 2009 (UTC)

I'm not sure what you mean. The Truce was indeed broken in LaFleur, but they worked out a way to continue it by giving them Paul's body. There is only one Truce, no pre-LaFleur one and post-LaFleur one. The conditions of how the Truce came about was answered in the Season 5 Dharma Initiative Kit with the copy of the Letter of Truce. At least, that is the reason I presume the UA got removed.--Baker1000 23:40, November 28, 2009 (UTC)

Baker nailed why I removed it. Virtually everything to know about "how the Truce came about" was answered in the set. --LOST-The Cartographer 01:46, November 29, 2009 (UTC)

Oh, alright, I overlooked the DI Kit. I guess this means it won't get coverage within the show itself. Bwanartalk|contrib 12:09, November 30, 2009 (UTC)

On this page it is implied that the Arrow station is destroyed. When did that happen? Sure, it was in a state of decay, but its structure is still intact, unlike the structures of the Swan and the Flame. It's status in the Discovered stations chart should therefore be changed to either 'unused, partially destroyed' or 'unused, badly decayed', something along those lines.

Will we see the DI times again?/Flash backs?

This has been troubling me. Since now the side plot devise is "Flash Sideways" will they do a "Flash back" about Richard, or Widmore, or particularly what happend to the DI once the bomb went off? I mean I think we will see the end come together but I don't know if we will see a flash back. What do you think? Phryrosebdeco23 21:40, March 11, 2010 (UTC)

We know that DHARMA is an acronym, however according to Acronym and initialism article on Wikipedia, acronyms pronounced as words or of a certain length are not necessarily always written in all capitals. For example: Unicef, laser, radar, etc... In english, spanish Wikipedia and Lostpedia in spanish the admins moved the page for that reason. So we should move the page to "Dharma Initiative"?

I think we should. In the television show itself, nobody ever said that Dharma was an acronym, and everyone pronounced it as one word rather than as six letters. In fact, I don't even know what the source is for the claim that it is an acronym! — Lawrence King (talk) 19:15, December 3, 2010 (UTC)

We should go with however it was seen printed on the show. Was it ever seen not in all-caps, either on an orientation film or printed material? I don't remember. As for the canonicity of the acronym, it came from The Lost Experience. As I recall Damon and Carlton have stated that the information revealed about the Hanso Foundation and the DI were canon, while the present-day events were not. --Celebok 19:37, December 3, 2010 (UTC)

I agree that we should follow the show's style. Even Wikipedia spells out acronyms in all caps if that's common usage. A quick search reveals entries like UNIVAC, CAPTCHA and even the USA PATIOT ACT, which other sources simply call the Patriot Act. Orientation videos, banners and photo captions in the show spell the name out as DHARMA. Even if it weren't an acronym but simly used all caps for some unknown reason, we should follow that format. --- Balk Of Fame ♪ talk 01:33, December 4, 2010 (UTC)

- It can be written as both it seems. I see no point in moving the article if this is the case. It's actually written as DHARMA throughout the Lost Encyclopedia, which we've officially adopted as canon. They must have asked Gregg Nations if it's necessary to write it in capitals every single time before doing so, as it must have been a pain in the backside when writing it. And yes, Darlton said the DHARMA information from TLE was canon. Also if we're looking for in-show uses of DHARMA, just take a look at pretty much every DI logo. Any with the name use capitals.--Baker1000 00:00, December 4, 2010 (UTC)

Were there any Lost episodes in which the word "DHARMA" was seen followed by the word "INITIATIVE" or "Initiative"? If there are instances in the show where we saw the two words as "DHARMA Initiative" or "DHARMA initiative", then that would prove it was being capitalized as an acronym. But if all we saw was the word "DHARMA", that doesn't prove it one way or another. The penny in my pocket says "LIBERTY" on it, but that's not an acronym. — Lawrence King (talk) 02:22, December 5, 2010 (UTC)

I think we have to consider this too.

Good find. We also have this shot from the epilogue, which we actually noted as a blooper at one point. That's two shots of "Dharma" and zero shots of "DHARMA Initiative". --- Balk Of Fame ♪ talk 04:52, December 6, 2010 (UTC)

Okay, then let me get this straight. (1) In the television show, Dharma was spelled using lower-case letters at least twice. When it is in all-caps, that's because it's on a logo, and therefore naturally all-caps, just as we use all-caps on our coins and on the Great Seal on the dollar bill. Never in the television show was there any reference to it being an acronym. (2) The Lost Encyclopedia says it was an acronym. Therefore, the policy on Lostpedia is to capitalize it as an acronym, and declare every use of lower-case letters in the show itself to be a "blooper". This is really our policy? — Lawrence King (talk) 15:26, December 6, 2010 (UTC)

No. Until now, we all assumed the show really did spell it "DHARMA Initiative". If the show instead used "Dharma Initiative", we must we must too. We have not adopted the Lost Encyclopedia as Word of God. Its article on our site consists chiefly of a list of its errors. Gregg Nations clearly did not proofread the encyclopedia. Instead, its authors consulted Gregg Nations when they had questions. --- Balk Of Fame ♪ talk 15:46, December 6, 2010 (UTC)

This cap of the Truce, which spells it DHARMA: 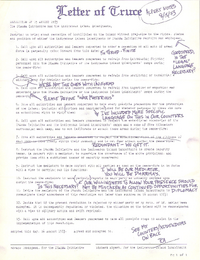 How about this explanation: Maybe the inconsistency exists within the Lost universe itself. There were probably a hundred or so Dharma people in New Otherton, and dozens (hundreds?) of Dharma workers in Ann Arbor and other parts of the world. Maybe they didn't all have the same opinion about its capitalization! The Truce you posted proves that Horace Goodspeed himself spelled it with all caps. The welcome sign shows that someone in public relations who wanted to put a smile on the face of Dharma used lower-case letters. Maybe neither is a blooper! — Lawrence King (talk) 16:05, December 6, 2010 (UTC)

We've likely discovered the true rift that brought the Initiative down.

But I think we're beyond calling either spelling a blooper. We're now looking for the "true" spelling, if one exists. Assuming none of these sources are bloopers, I'd defer to the subtitle (is that the right term?) from the epilogue. No one in-universe wrote that. That's a message directly from the creators to us. Similarly, when a subtitle tells us "3 years later", we consider that above any contrary in-universe evidence.

Right now, the only examples we have of "DHARMA Initiative" come from supplementary printed material in the Special Edition of the season 5 DVD. I don't think we should value that over anything from the show itself. --- Balk Of Fame ♪ talk 16:29, December 6, 2010 (UTC)

I was going to point out the Truce letter but looks like you spotted it first. I think it is a good point that the subtitles are the most accurate when you consider other cases of screen text like "3 years later" or "Day 8" are considered above all else. If we're going to rename the article, we must not suddenly turn around and say the acronym is incorrect. The information about Dharma and Hanso in TLE was there because it wouldn't have found its way into the story of the show. Darlton said it was canon, so the acronym must be also.--Baker1000 20:15, December 6, 2010 (UTC)

I agree. We could, for example, begin the first paragraph of the article along these lines:

The Dharma Initiative, also known as the DHARMA (Department of Heuristics And Research on Material Applications) Initiative, was a scientific research project that ....

I looked at the Wikipedia pages for things like Radar and USA PATRIOT Act, but they don't seem to be styles we can imitate directly, because the history of how RADAR mutated into radar is known. We don't actually know whether DHARMA began as an acronym and then became a word when people began using it frequently. That's just one possibility. An equally reasonable guess is that whoever invented the name was aware that the Island had supernatural properties, and chose the name "Dharma" for that reason, and then decided to invent the acronym after the fact so that reputable scientists would join the project and not think it was nuts. Again, just my speculation. — Lawrence King (talk) 18:54, December 8, 2010 (UTC)

Retrieved from "https://lostpedia.fandom.com/wiki/Talk:DHARMA_Initiative?oldid=1014352"
Community content is available under CC BY-NC-ND unless otherwise noted.