I did a little research on my own without reading anything on Lostpedia to try and decipher some of the heiroglyphs. What I found disagrees somewhat with what is on this page, but I didn't want to change the page without people agreeing, so I'm writing it here. I used two websites, one has illustrations that more closely match those on the door, and one that has better information on what they mean. I used pictures from DarkUFO to view the glyphs, found here: [1] The websites I used to translate were [2] which gives better illustrations [3] which has the translations" The main section that you can make out has at least 8 symbols. The top left one is A26, which translates as "servant, to call." Some of these have multiple meanings; I'll include all listed meanings. Next to it on the right is S29, which appears to translate to the sounds "S", continuing to the right, the next one is M17, sound sign for "schma", ideogram for "waiter Egypt." In the top right corner of the section, there is a squiggly line, which most closely resembles I14 or I15, which translates to "snake". There is another symbol above the squiggly line but I couldn't find a match. Going back to the left on the bottom is a symbol that appears to be V7 or V8, sound sign for "schn." Next is A24, which has several meanings. "To hit/strike, power or strength, teach lesson, call, be happy." Next is W24, "get." Last is a cross. On this page it refers to it as an ankh, but it looks different than the ankhs I've seen. I could not find a match for this yet. I might have made mistakes, and I don't know how you read these (left to right, right to left, etc.) It appears that the basic theme is "calling the serpent to strike" or something along those lines. --Drevil877 06:41, 27 April 2008 (PDT)

Frankly, I find most of the translations and interpretations to be highly suspect. Aside from the fact that there are an awful lot of markings on the door that are being ignored (including one that looks to me like a pictorial "no fishing" sign), the web sites usually used to "translate" hieroglyphics are all primarily based on Budge's work - which is at best very outdated, and at worst completely made up. I think that untill the producers et al. come out and tell us what it's supposed to mean, any such translation is sheer speculation (and doesn't belong on the page).
That being said, I have no problem with identifying the symbols present on the door and including "non-cannon" images to provide better angles, etc. --Doc 10:39, 26 June 2008 (PDT)

I added a disclaimer to the hieroglphics section. Hopefully that should appease everyone.

I'm study the hieroglyps for the french page. With lots of pictures and a film about the construction of the door i've found every signs and made a translation which same realistic. If you are interrested, this is the page. Sorry for my english. --Vivere.memento 18:38, 10 October 2008 (PDT)

Thanks for letting us know. The page looks good. I'm going to run it through Google translation service and incorporate some of it here.

Hey I found this on Jorge's blog and didn't know where to put it. It's a pic of him with the door behind the scenes. Didn't know if this was a new angle or anything that might help decipher anything. --Gluphokquen Gunih ▲ 17:43, 20 May 2008 (PDT) 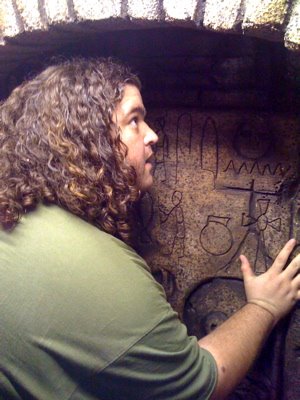 You shouldn't put it on the actual article, sinse its not canonical. --JPB. T. C. E.

I transliterated the Glyphs on Ben's Door. All it says is "Summon Protection"

Glyphs I made [4] Glyphs on Ben's Secret Door from "Mysterious Egyptian Influences" an interview with Damon at ABC.com [5]

Since we've seen inside it, should we rename it "Ben's Secret Room"? Or maybe "Monster Summoning Room"?

Reliability of the summoning

Regarding Ben's draining of the water in 2007, the article currently reads "However, the Monster did not show up, suggesting that summoning it is not necessarily a reliable process." However, if the Monster had taken Locke's form, then the Monster did indeed show up. --Swatki 03:02, 22 May 2009 (UTC)

Retrieved from "https://lostpedia.fandom.com/wiki/Talk:Ben%27s_secret_room?oldid=631744"
Community content is available under CC BY-NC-ND unless otherwise noted.