Where was she really sat on the plane?

Did Ana Lucia say that the last thing she remembers on the plane is getting hit on the head by someones hard case that had fell out of the overhead compartments? Hang on, didnt that happen to the Marshall escorting Kate, is she implying she was sat there or thereabouts, because she claims also to be from the tail section.

The Official Oceanic Air site lists her sitting somewhere in the tail section. It's also safe to assume that the case dropped on Mr. Mars' head wasn't the only case that fell from the overhead compartment during the crash. Just because we don't see something happening on screen, that doesn't automaticly mean it doesn't happen. --skks 06:11, 4 April 2006 (PDT)

Agreed. There's a lot of overhead luggage in a full plane like that. --Carl

Its something i found funny.. on all the promo shots for the show, esp those used for the large official desktop wallpapers, all the cast have obvious makeup on with island backgrounds behind them.. something thats a lot more subtle in the show itself. --MRNasher

Yet another victim of the islands/horror-movie) cliche of have sex and you're gonna die soon.

Does leave the question who did Artz do the horizontal tango with :P -MRNasher

I think Rousseau was feeling a bit lonely. --SilvaStorm

Who does Eko need to help?

Who did Ana-Lucia kill?

In "Two for the Road", when faux Henry attacked Ana-Lucia, he said to her "You killed two of us". As far as we know, she killed Jason, Goodwin and Shannon. Were Shannon or Jason one of the Others? Or did Ana kill someone more?--Perpetka 14:03, 2 July 2006 (PDT)

That's the one who came to "take" people, and Goodwin. --SilvaStorm

Why is this article under Ana-Lucia Cortez and not Ana-Lucía Cortez? --SilvaStorm

The page is protected, so a SysOp will have to do it. --SilvaStorm

I moved this page to Ana-Lucía Cortez, but it looks like Jabberwock changed it back on the 11 of August. I agree it should include the accent. --Aero*Zeppelin 20:21, 26 September 2006 (PDT)

It has been noted that her name can be spelt either way (Ana-Lucia/Ana Lucia) although "Ana-Lucia" is most frequently used. —The preceding unsigned comment was added by Browndog (talk • contribs), 09:49, 10 May 2007 (UTC).

Says who? Sorry, but I'd rather trust factual observation of sources and take the word of the people who make the show over an unsupported claim. We can observe that:
It's clear that the name of that character is meant to be, and actually is, Ana Lucia. 100% of the official occurrences I've looked up show "Ana Lucia". Even if you could dig up some few odd mistakes somewhere (although you haven't cited any), it could hardly counterweight the overwhelming evidence. -- Cheers (talk) 22:22, 11 May 2007 (PDT)

If the sources all say Ana Lucia rather than Ana-Lucia, thats great, we'll rename it. But can we stick to Ana-Lucia until we make that change. Mixing it in the article doesn't look good, and its easy to replace Ana-Lucia with Ana Lucia when we decide to do that (good ol find and replace)  Plkrtn  talk  contribs  email  04:02, 16 May 2007 (PDT)

I agree that we should rename this section Ana Lucia. It's spelt like that more than Ana-Lucia (i.e: Subtitles on DVD's etc). I did want it to be kept as Ana-Lucia but I suddenly had a change of heart and think it would be best suited to be named Ana Lucia. —The preceding unsigned comment was added by Browndog (talk • contribs) 2007-06-30T07:12:57.

"The Other Woman-Enhanced" also used her name without a hyphen. I'll move the article now. If anybody comes up with an official source for the hyphen, please post back here. Robert K S (talk) 07:10, 15 March 2008 (PDT)

Why were my changed removed, all I did was add a picture and tidy up some grammatical mistakes? I'm confused as to why that picture can't be included in the article which looks a bit bland now. —The preceding unsigned comment was added by Jamster (talk • contribs) 2008-05-27T10:33:39.

Help with a page fix?

Hey, we should rename this page to Ana Lucía Cortez, because in Spanish this name must be written with accents (I'm from Argentina and I speak in Spanish). And if you don't believe me you can see this link to the page in Spanish. Sincerely

I know we normally use promotional pics for main cast, but this isn't a picture of Ana-Lucia. It's a nice picture of Michelle Rodriguez that ABC's marketing department tells us is Ana-Lucia. She looked nothing like this at any point at the show. 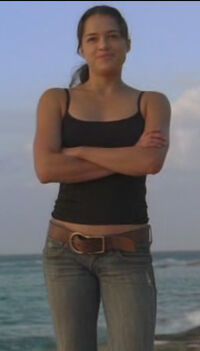 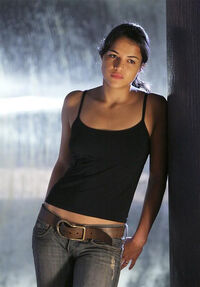 This is not how it works for main cast promo pics are used while it is not something she wore on the show the picture is official ABC material which are used on main characters to stop disputes like this from happening--Thelamppost 02:34, May 19, 2010 (UTC)

My THAT'S NOT ANA argument above seems off. Other photos from the current pic's shoot have been released. I suggest changing to this one. Same clothes, sure, but I think she little more like Ana here. Also, it's a full length shot, like most main character pics.--- Balk Of Fame ♪ talk 19:35, September 16, 2010 (UTC)

I like this newest one, it's soo goood :D It shows her whole body, unlike the other one. :D But maybe crop the legs off a bit more so it isn't so long. Julietfan2626 Talk Blogs

I think we should have a picture where they're actually posing. Like this full body promo one. Julietfan2626 Talk Blogs

if you think we should have the cropped one. Julietfan2626 Talk Blogs

I have always wondered why we have the one we have right now. She's got some funky facial expression, and her hair and clothes are different. Ocie14 21:57, September 19, 2010 (UTC)

I am removing the section. I'm not sure if it is part of the character template but whether it is or not the contribution adds nothing to the summary, is poorly written, full or inaccuracies and opinions which are offered as if they are widely held whereas they are simply opinions of the writer. Let alone the frequent spelling errors and poor construction. I considered attempting a re-write but felt it not worth while.    Charles Kane     talk  contribs   email   08:23, May 30, 2010 (UTC)

Johnlanigan added a line to say that Ana's flash sideways preceded her moving on, which in turn preceded her visions to Hurley. Baker1000 rightly undid this as explicitly stating what's only a theory. But our current article, in placing the flash sideways after the visions, somewhat endorses the opposite theory.

I think that's a problem. Of the two, Johnlanigan's seems more valid. In her visions to Hurley, which occurred maybe a year of more after her death, Ana came from an afterlife in which she knew she was dead and could communicate with Libby. Yet we presume characters have their flash sideways immediately upon dying, and we treat awakening and moving upon as their final epiphany.

We could reverse the two sections' order, first listing the flash sideways and then the visions. We won't explicitly state one happened before the other, but if we must imply one order, I think we should go with this one.

Unfortunately, we can't simply default to the order in which Lost showed us the scenes because the character pages blatantly ignore this order in arranging flashes against real-time scenes. --- Balk Of Fame ♪ talk 14:12, December 14, 2011 (UTC)

I was thinking about this myself. I had a look over on Charlie's article to make sure we weren't presuming the after death appearances were a result of "moving on" and it appears we use the opposite order for that article. I believe this is the precedent we should follow.--Baker1000 21:39, December 14, 2011 (UTC)

Retrieved from "https://lostpedia.fandom.com/wiki/Talk:Ana_Lucia_Cortez?oldid=1051253"
Community content is available under CC BY-NC-ND unless otherwise noted.