"Man of Science, Man of Faith"

The Swan computer was located inside The Swan, and was used for entering the Numbers every 108 minutes, according to the protocol set forth in the Orientation film. Assumed to be about 30 years old at the time of its encounter by the survivors, the computer was a composite of vintage computing devices, and usually had a cursor ">:█" flashing on the upper left corner of the screen.

A piece of the orientation film found by Eko, and later spliced into the movie by Locke, warned that the computer wasn't to be used for anything other than entering the code, and must never be used to contact the outside world. Nonetheless, communication via the computer was possible, as Michael communicated with Walt while he was on shift in the Hatch. ("What Kate Did") It appears that Michael activated chat mode by simply banging on the keys until the computer displayed a chat interface, or it may have been activated by the other end. ("The 23rd Psalm") Although, as Locke had shown him earlier, typing anything before the 104-minute mark didn't have any effect. It is likely that DharmaTel, which was referenced on the blast door map, is or was an Island-wide network of connected computers that connected the Swan computer to other stations.

After the survivors had made their way into the Hatch, Kate ended a standoff between Desmond, Jack, and Locke by striking Desmond with the butt of a gun, causing him to fire a shot and hit the computer. After blowing a fuse and shorting out the computer by attempting to power it up, Desmond panicked and fled, leaving Sayid to come and fix the computer just in time for the Numbers to be entered. ("Orientation")

After Desmond had returned and was convinced that the button needed to be pushed to prevent a catastrophe, Locke destroyed the computer by throwing it to the floor in an attempt to stop him from pushing the button. It was this breakage which led Desmond to trigger the fail-safe mechanism, causing the Swan station to implode. ("Live Together, Die Alone, Part 1") 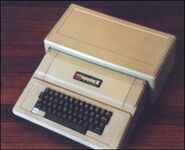 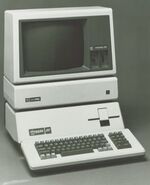 An Apple III system, only the monitor of which is used on the show

For fan theories about these unanswered questions, see: Swan computer/Theories