The Swan Orientation film was a film produced by the Hanso Foundation to instruct the inhabitants of the Swan, a DHARMA Initiative station. The film's official title was "3 of 6 - Orientation". It was narrated by "Dr. Marvin Candle" (an alias of Pierre Chang) and bore a copyright date of 1980. The film was revealed by Desmond in the episode "Orientation". It was hidden behind a copy of the book The Turn of the Screw.

The film started with a short history of the DHARMA Initiative. It explained how the Initiative was founded in 1970 by Gerald DeGroot and Karen DeGroot, two doctoral candidates at the University of Michigan. Taking the example of B.F. Skinner, they imagined a "large-scale communal research compound" where research could be conducted into meteorology, psychology, parapsychology, zoology, electromagnetism, and Utopian Social... (this part is unclear and could refer to Utopian Socialism or Utopian Social Engineering; the Spanish translation referred to "Ingeniería Social Utópica", or Utopian Social Engineering). According to the film, the DHARMA Initiative received their funding from the Danish industrialist and munitions magnate, Alvar Hanso, through his Hanso Foundation.

Further, the film detailed the procedures at the Swan station. It explained that The Swan was station number 3, originally designed to study "the unique electromagnetic fluctuations" from its part of the island. It did not describe these characteristics however but apparently a certain "incident" occurred at some point (either the 1977 event or a speculated second one). As a result, every 108 minutes, a code (the Numbers) had to be entered into the computer terminal (see pushing the button). Reasons for the execution of the protocol were not provided, but it was emphasized that it was of "utmost importance". Partners at the station were there for 540-day shifts, after which new replacements would arrive.

Later in the episode "What Kate Did", Eko revealed a new piece of film to John Locke. The piece was discovered in a Bible at the Arrow DHARMA Initiative station. After splicing the piece into the original film, the two watched it again. The spliced clip revealed a strong warning not to use the computer for any external communication with the outside world, and to only use the computer for entering the code.

In the episode "Live Together, Die Alone, Part 1", Desmond asked Kelvin Inman why there were parts missing from the film. Kelvin commented how his partner who resided with him in the Swan, Radzinsky, made edits to parts of the film. It is unknown why Radzinsky did this. 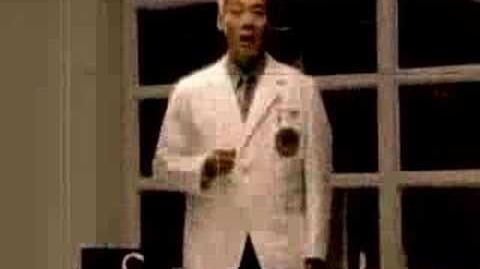 It has been noted previously that the footage of Dr. Marvin Candle which appeared in "Orientation" differed from the footage inserted in "What Kate Did". This assertion is not entirely correct. The inserted footage is actually identical in terms of actor, costume, lighting, etc. immediately before and after the first splice. However where the alternate footage was introduced the actor is clearly seen to be standing in a different posture, his necktie is tied differently, the lab jacket is different, and the hair and lighting are clearly different. Given that this change occurs in the middle of the "inserted" portion from The Arrow, it seems likely that the differences are a byproduct of unplanned reshooting in production, and are not meant to be taken as a hidden plot point.

Retrieved from "https://lostpedia.fandom.com/wiki/Swan_Orientation_Film?oldid=1124759"
Community content is available under CC BY-NC-ND unless otherwise noted.