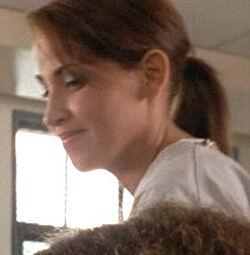 Nurse Susie Lazenby worked at Santa Rosa Mental Health Institute with Dr. Brooks. She gave Hurley and Libby their pills when the two were at the Institute prior to the crash of Flight 815. ("Dave")

Years later, Nurse Lazenby once again helped treat and medicate Hurley, when he returned to the Institute after getting off the Island as a member of the Oceanic Six. ("The Beginning of the End")

When Locke appeared next to Hurley's table outside the Institute, Hurley thought Locke was dead and his spirit came to visit him like Charlie had done. He called out to Nurse Lazenby to ask if he was speaking to an old man in a wheelchair and she confirmed this. When Hurley started acting up and wanted to get away from Locke after learning he was with Abaddon, the nurse and another orderly escorted Hurley back inside the Institute. ("The Life and Death of Jeremy Bentham")

An unspecified amount of time later, Nurse Lazenby was still working at Santa Rosa. Ben Linus asked her if could see a patient by the name of Keith Johnson, who turned out to be Walt. ("The New Man in Charge")

Retrieved from "https://lostpedia.fandom.com/wiki/Susie_Lazenby?oldid=1095838"
Community content is available under CC BY-NC-ND unless otherwise noted.