Sunset on the Beach

Sunset on the Beach is a public service program run by the city and county of Honolulu, Hawaii, which has hosted early screenings of the first three season premieres of Lost. An advanced screening of the final season premiere was held January 30, 2010. [1] The program features entertainment and food starting at 4:00 pm on the beach at the eastern edge of the Waikiki district, and a video program such as a movie, television program, or documentary begins on a large outdoor screen at sunset. The event has been a source of significant spoilers for the Lost season premieres.

On August 28, 2004, ABC screened the premiere episode of the Lost pilot at Sunset on the Beach, 25 days before the official series premiere on September 22. A day later at the same location, NBC screened the premiere of its series Hawaii at Sunset on the Beach. Both events featured the cast. However a pre-edit version of the pilot episode had been screened publicly more than a month earlier at Comic Con 2004 (attended by Matthew Fox, Dominic Monaghan, and Evangeline Lilly; J.J. Abrams was scheduled to attend but did not appear) on Saturday, July 24. As Lost was not yet a hit, news stemming from these events on the internet was subdued and generally geared toward promotion rather than outright spoilers (e.g.: 1).

After Season 1, Lost was now a hit series with an uncommonly dedicated fanbase, and the Sunset on the Beach event for the world premiere of the second season of Lost drew a crowd of thousands. The now much-anticipated episode "Man of Science, Man of Faith" was screened on Wednesday, September 14, 2005, fully one week before the airing of ABC's official season opener on September 21. This audience represented a much larger attendance than the year before, or for other typical Sunset on the Beach events. Although the screening was accompanied by a continuous downpour of rain that began after sunset, the majority of the crowd stayed through the screening of Lost, although many left soon afterwards, choosing not to stay in the rain for the second part of the double feature, a new episode of ABC's Invasion. An official program on colored paper was handed out for this event, listing both screenings.

Many of the familiar main cast made an appearance at this premiere, including Matthew Fox, Harold Perrineau, Josh Holloway, Naveen Andrews, Dominic Monaghan, Daniel Dae Kim, Jorge Garcia and Maggie Grace. The as-yet unseen Adewale Akinnuoye-Agbaje, Cynthia Watros, and Michelle Rodriguez were also present. Producer Jack Bender and Honolulu Mayor Mufi Hanneman also attended. However, some major cast members such as Terry O'Quinn, Yunjin Kim, and Evangeline Lilly did not attend, as they were actively working on a film shoot for Lost that day, according to Bender.

Due to the fan frenzy from the show's popularity, the screening of Lost was preceded by Bender asking the audience not to give away spoilers to the internet. Despite Bender's pleas, the screening was soon followed by the release of spoilers by Ryan Ozawa on various small websites, and a detailed scene-by-scene summary of the episode at AintItCool.com.

Although the Lost production crew was displeased with the spoilers from the previous year, there was a special Sunset on the Beach preview screening of the Season 3 premiere on Saturday September 30, 2006, which was four days before the officially scheduled ABC airdate on October 4. The event was publicly confirmed on September 22.

Red carpet arrivals began at 5:30pm (with Michael Emerson arriving first), although food and musical events began at 4:00. The events for the premiere of Season 3 began after sunset. As with all Sunset on the Beach events, admission was free, and the screen was erected at the east end of Waikiki, at Queen's Surf Beach. Programs were distributed at food booths, and the ABC booth gave out goodie bags in return for filling out a survey. The attending crowd was composed of thousands of people, with estimates up to 15,000.

On December 19, 2007, Ryan Ozawa reported that the Sunset on the Beach premiere was still on, despite a change in the episode's broadcast television airdate to January 26, 2008. [2] On January 10, 2008, The Honolulu Advertiser reported that the Season 4 event had been canceled, due to events relating to the WGA strike which had temporarily halted the production of Lost. The event's January schedule confirmed this, as did the television broadcast premiere occurring on January 31, 2008 without a Sunset on the Beach premiere taking place.

There was no Sunset on the Beach screening for the Season 5 premiere in 2009. Due to the world financial crisis, there had been speculation that the event might be canceled, rumors that were finally first confirmed by Jon Lachonis in early November 2008. [3]

ABC screened the first hour of the two-hour Season 6 premiere episode at Sunset on the Beach on January 30, 2010, three days before the national broadcast premiere on February 2, 2010. Executive producers Damon Lindelof and Carlton Cuse addressed the estimated 15,000 fans with a special message. [4] The screening began at approximately 6:30 pm on Waikiki beach in Oahu, and was followed by a screening of a new episode of the ABC comedy Modern Family. Those who attended were also able to bid on a signed photo of the entire cast among other items in a special auction at the event. (ABC press release)

September 14, 2005: A view close to the screen and stage just before sunset . The crowd of thousands stretches off to the right for the Season 2 world premiere.

September 14, 2005: A view after sunset from behind the projection screen-- the presentation from this vantage point was reversed. The silhouettes are those of the cast, Jack Bender, and the Honolulu mayor.

September 14, 2005: A mud-stained program from this rainy event.

September 30, 2006: A program. The reverse side is a menu of the various food vendors, from which the programs were distributed.

September 30, 2006: Kiele Sanchez is still an unknown face among the fans

September 30, 2006: Michael Emerson is the first to arrive on the red carpet 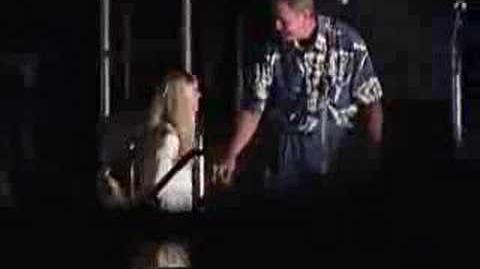 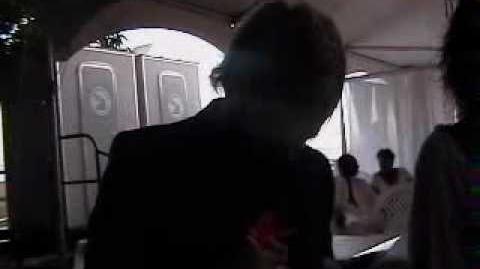