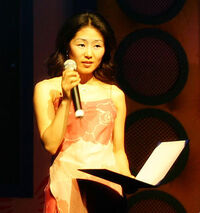 Sun Lee (이선) is the voice actor (役), who dubbed the voice of Kate Austen (케이트) in the Korean language broadcasts of Lost (로스트).

Lee has dubbed numerous KBS and SBS productions, and is a member of the Korea Broadcasting Voice Acting Division (한국방송_성우극회) since 1992. Among the parts Lee has dubbed includes Monica Belucci's part of the Mirror Queen in The Brothers Grimm, as well as various other film, television, and anime productions.

Retrieved from "https://lostpedia.fandom.com/wiki/Sun_Lee?oldid=970140"
Community content is available under CC BY-NC-ND unless otherwise noted.