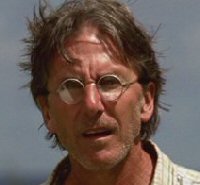 Sullivan was one of the middle section survivors of Flight 815.

On the 12th night after the crash, Sullivan developed a rash, which he asked Jack to examine. Jack said that it was hives, a common rash caused by heat and stress. Sun treated the rash with aloe vera. Sullivan showed up at the Island Open Golf Tournament put on by Hurley and asked if he could play. When the survivors started to bet on the golf game, Sullivan bet his dinner that Jack could make the putt. ("Solitary")


If Sullivan had not died prior to the beginning of the time shifts, then he died in the flaming arrow attack in 1954, ("The Lie") since Rose and Bernard Nadler are presumed to be the only survivors of it. ("The Incident, Part 1")

Retrieved from "https://lostpedia.fandom.com/wiki/Sullivan?oldid=1117616"
Community content is available under CC BY-NC-ND unless otherwise noted.