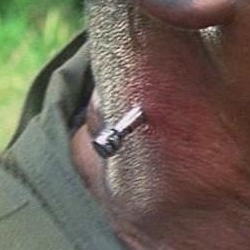 Stun darts are weapons used by the Others and Charles Widmore's men. They can be used nonlethally to incapacitate targets for capture, or lethally to supplement the Others' arsenal of firearms.

Stun darts are fired at a target's neck. When a dart penetrates the skin, it administers a high-voltage electrical shock, in similar fashion to a Taser. However, a notable difference between the Others' darts and Taser weapons from 2004 is that Taser dart was connected by wire to its firing weapon to deliver its charge. The Others' darts apparently have built-in electrical devices that deliver their charge upon impact.

Retrieved from "https://lostpedia.fandom.com/wiki/Stun_dart?oldid=1114710"
Community content is available under CC BY-NC-ND unless otherwise noted.