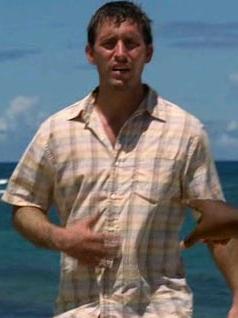 "Steve" redirects here. For other uses of "Steve" or "Stephen" see Steve (disambiguation).

Steve Jenkins was a middle-section survivor of Oceanic Flight 815. His character was commonly mistaken for Scott Jackson, a confusion that became a running joke in the script. Steve survived on the Island for 101 days, but following a time jump to 1954 he was not seen again after the flaming arrow attack. His fellow survivors presumed he either died in the flaming arrow attack or was killed by The Others of 1954 while waiting for Sawyer's group by the creek, although his corpse has not been shown to confirm this.

According to Dustin Watchman, who plays Scott, Steve was apparently also friends with Scott before the crash and was traveling back home with him after going to Australia.[1]

The night before the flight, Steve was staying in the same hotel as Michael and Walt. When he heard Michael and Walt arguing in the hallway around 5:25am, Steve left his room to inquire about the problem. ("Exodus, Part 1")

Steve and Scott formed a friendship of sorts on the island, which was most likely what led to people mistaking them for each other. According to Sawyer, Steve sleeps near, and is implied to have relations with, Tracy. After, Jack made a decision to move into the jungle and use the caves as a suitable living space, Steve and Scott decided to stay on the beach. On Day 8, Steve was with Scott and Jerome at the beach, when Charlie rushed to the beach to inform the survivors that Jack was caught in a cave collapse. Michael asked Scott and Steve to help him, however mistaking them for each other. He was then seen trying to help. ("The Moth")

Steve and Scott were also present for Hurley's "Island Open" golf tournament and Jack's climactic putt. After the attack on Claire in the caves, Scott and Steve help Hurley look around for who possibly attacked her. The next day he and Scott are seen at the beach folding clothes, while Hurley conducted his survey. ("Solitary") ("Raised by Another")

The next day Steve is seen at the caves when Jack asks the group if they have seen Ethan. On day 28 Scott's corpse was found on the beach, with several broken bones, battered and bloody and was allegedly murdered by Ethan. Steve attended his funeral. ("All the Best Cowboys Have Daddy Issues") ("Homecoming")

When Danielle Rousseau arrived at the camp to deliver her dire warning about “the Others”, he was present to hear this, and later was witness to the black smoke that filled the sky, as he was helping the party with the raft. Steve also listened to Jack deliver his speech about gathering in the caves, and packed his supplies and prepared to leave. When the raft launched, he was present on the beach to say goodbye. ("Exodus, Part 1")

While inventorying the food inside the Hatch, Hurley comments to Rose that all of the food is going to mess everything up. He gives the example of Charlie and Steve both wanting a bag of potato chips, and it would be he who would have to choose between them on who would get it, and then the one that didn't would resent him. That day Steve was hanging out with fellow survivor Craig at the beach on the day that Hurley passed out the food from the Hatch to the group. Steve would join his fellow survivors in the partaking of the food that night, and thanked Hurley for doing what he did. ("Everybody Hates Hugo")

When Bernard builds the S.O.S. sign, he asks Hurley to ask "Jenkins" (likely referring to Steve) to help. He soon lost interest however, and abandoned him. ("S.O.S.")

When Kate and Sawyer returned from captivity at the hands of the Others, Steve was one of the many survivors who rushed to welcome them back. A few days later Steve is seen walking to the tents. According to Hurley, Steve brings water to the trough every morning. ("Tricia Tanaka Is Dead") ("Catch-22")

Steve left the beach and went with Locke's camp to the Barracks according to the 4/19/08 podcast. In the 5/8/08 Podcast, Damon and Carlton said that Steve was the second one shot during the invasion of the Barracks, but they seemed to be joking and the actual scene shows Blonde Casualty being shot second, and Jerome being shot third.

However Steve is seen on the beach when the Zodiac reaches the beach. After Daniel successfully finishing the first trip to the Kahana, Steve and four other survivors boards the zodiac raft. However, the raft did not reach its destination, as the Kahana was destroyed beforehand, with the raft moving along with the Island. ("There's No Place Like Home, Part 2")

After the Island moved, Steve was not seen returning to the island on the Zodiac raft with the rest of the passengers (most likely a continuity error). However it is presumed Steve fled into the jungle with the majority of the survivors when fire arrows rained down on the survivors. ("The Lie") Three years after the flaming arrow attack, Rose and Bernard presumed themselves (along with Vincent) to be the only survivors, ("The Incident, Part 1") and they most likely assumed that Steve, along with the other remaining survivors, had died during or after the flaming arrow attack in 1954.

"Jenkins" was listed as number 285 on Jacob's list of candidates, in both the cave and the lighthouse. It is likely this was referring to Steve.

Retrieved from "https://lostpedia.fandom.com/wiki/Steve_Jenkins?oldid=1105905"
Community content is available under CC BY-NC-ND unless otherwise noted.