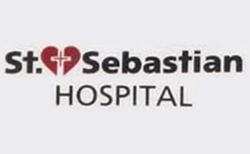 St. Sebastian Hospital is a hospital in Los Angeles where Jack Shephard and his father, Christian Shephard, worked as spinal surgeons.

At various times, Adam Rutherford, Sarah Shephard, John Locke, Omer Jarrah, and Sun Paik have all been patients at the hospital.

In 2001, Adam Rutherford, and Sarah were taken to St. Sebastian after their accident. Jack Shephard chose to save Sarah over Adam, as Adam's case was hopeless. Adam was pronounced dead at 8:15 am. Jack's father, Christian Shephard, was Chief of Surgery at that time. ("Man of Science, Man of Faith") Adam's daughter, Shannon Rutherford, and his wife and Shannon's stepmother, Sabrina Carlyle, later met at the hospital after having learned about Adam's death. ("Abandoned") A short time later, Jack operated on Sarah and miraculously restored her ability to walk. ("Man of Science, Man of Faith")

Several years later, Angelo Busoni, who had an inoperable spinal tumor, chose St. Sebastian for his operation. He specifically asked to be operated on by Jack. His daughter, Gabriela Busoni, accompanied him. Even though the situation was hopeless, Jack decided to operate anyway, but Angelo died on the operating table. ("The Hunting Party")

In July 2004, Christian Shephard (who was a longtime alcoholic) fatally botched a surgery on a woman named Beth while under the influence. Even though he attempted to get Jack to help him cover it up, Jack reported his father, which resulted in Christian losing his position at St. Sebastian. ("All the Best Cowboys Have Daddy Issues")

Following his return from the Island, Jack continued to work at St. Sebastian. In early September 2007, he was preparing for a surgery on a patient named Ms. Berenberg when he started seeing his dead father. ("Something Nice Back Home") This eventually caused him to start drinking and becoming addicted to pills. After having saved a woman, Mrs. Arlen, from a burning car wreckage (who had in fact crashed her car when she saw Jack trying to commit suicide), Jack insisted on operating on her, but the new Chief of Surgery at St. Sebastian, Dr. Hamill, relieved Jack of his duties, realizing his heavy substance abuse. ("Through the Looking Glass, Part 2")

A few days later, David Reyes brought a heavily tranquilized Sayid Jarrah to Jack, who in turn brought Sayid to St. Sebastian. Despite being suspended from work, Jack successfully treated Sayid, causing him to wake up. ("The Lie") Shortly after, the Chief of Clinical Services, Evelyn Ariza, called Jack and reminded him that he had been suspended from work. In the meantime, an operative of an unknown force disguised as a male nurse attempted to sedate Sayid again, but was successfully overpowered by Sayid just as Jack and Ben Linus entered Sayid's hospital room. Subsequently, the three left St. Sebastian. ("The Little Prince")

Omer Jarrah is brought to St. Sebastian after being badly beaten. Jack Shephard is seen briefly in a hallway. Another doctor tells Nadia and Sayid that Omer was mugged and suffered a punctured lung. ("Sundown")

Desmond and Charlie are brought there after their car accident. ("Happily Ever After")

St. Sebastian appears to be within driving distance of the stadium where Jack and Desmond first met, since Jack goes there to run the steps after his frustration with Sarah's surgery. ("Man of Science, Man of Faith")

St. Sebastian is also within driving distance of the Lynford Hotel, where Christian Shephard had his Alcoholics Anonymous meetings. ("A Tale of Two Cities")

Retrieved from "https://lostpedia.fandom.com/wiki/St._Sebastian_Hospital?oldid=1112656"
Community content is available under CC BY-NC-ND unless otherwise noted.