This article is about the episode. For other uses of "Special", see Special (disambiguation). 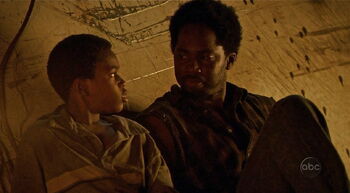 "Special" is the fourteenth episode of Season 1 of Lost. Michael becomes extremely angry and jealous at Walt's friendship with Locke, leading to tension between father and son. Michael also decides that he needs to get his son off the Island, and proposes constructing a raft. Flashbacks in this episode center around Michael and Walt's first meeting after eight years without seeing each other.

Michael and his partner Susan shop in a store for baby supplies. The two are soon expecting and are extremely excited. Michael says he wants to call the baby "Walt," after his father.

Some time later, baby Walt sits playing as Michael argues with Susan. She has been offered a prestigious position with a law firm in Amsterdam and wishes to take Walt with her. Susan says they had talked about taking time apart, and she does still love him, but she has already accepted the position. Michael promises to fight her, but Susan points out they are unmarried, and as a mother with a steady income in comparison to Michael, he would not stand a chance of winning a custody battle. Michael simply looks at his young son as he plays with his toys. ♪

Months have passed since Susan left Michael. He calls her from a pay phone asking to speak to Walt. She tells him it is not a good time, and Michael hears a man’s voice in the background. Susan reveals she has been seeing someone else, her boss Brian Porter. Michael says he is coming to Amsterdam, not for Susan, but to take his son back. Hanging up, Michael storms away but, forgetting to look, walks out into the middle of the road and is hit by an oncoming vehicle.

In a hospital, Michael draws a picture of an injured man in a cast. The nurse comments on how good his work is, and he tells her the picture is for his son. As she leaves, Susan appears and tells Michael that she’s covering all his medical costs for him. Michael is immediately suspicious, and Susan admits she will be marrying Brian and he wants to adopt Walt as his legal son. Michael refuses; Susan questions his motives, suggesting that Michael is holding on for his own stubborn principles rather than love for his son.

Walt sits staring at Vincent as Susan and Brian talk about their job. The three are in Australia, with Susan dealing with an important case. Susan suddenly starts to feel faint, and as Brian gives her attention, the two start to ignore Walt. Walt tells them to look at the birds in his book numerous times, and he starts to get upset; but they continue to pay him no notice. At that moment, a small bird crashes into the window. Both Brian and Walt go to look at the bird's lifeless body. A stunned Brian watches as Walt simply returns to his book, looking at more bird pictures.

In America, Brian knocks at Michael’s door. He informs Michael that Susan died the day before. Susan had a blood disorder and began to feel symptoms about a week before her death. Michael asks where Walt is, and is shocked to hear that Brian has left him with the nanny at such a time. Brian tells Michael that before her death, Susan said she wanted Michael to have custody. Michael soon sees past this, and realizes Brian does not care for Walt, only pursuing paternal rights in the past to please Susan. He offers Michael plane tickets to and from Sydney, inviting him to come and take Walt. Michael is livid that Brian would willingly abandon Walt, but is confused when Brian says the boy is different, and "things happen when he is around."

In Sydney, the nanny lets Michael in and gives him some of Susan’s effects. She also produces a box. As she excuses herself, Michael walks down the hallway, opening the box. Inside he finds all the cards and letters he had ever sent to Walt, which had all been intercepted by Susan. Michael hears the nanny tell Walt that someone is here to see him, and Michael follows the voices with apprehension. ♪

Making his way to the porch, Michael finally meets Walt again. He tells him that he is his father, and tells him he’s sorry about Susan. Walt asks where Brian is, and Michael says he’s taking Walt home with him. Walt is reluctant to go with a stranger, and Michael is forced to lie. He tells Walt that it is not Brian’s decision, and as Michael is his legal guardian, he has to go with him back to America. Walt asks about Vincent, his dog, and Michael says Brian said they could have him. ♪

Michael wanders the jungle shouting for Walt. ♪ He finds Charlie, who is searching for Claire’s luggage. Neither can help the other, nor can Jack or Hurley, whom Michael sees next. As Michael leaves to find his son, Hurley comments to Jack that he seems to hate being a dad.

Walt is with Locke and Boone, learning how to throw knives. After being told to focus the task in his mind’s eye, Walt shows an unusually natural proficiency. Michael finds them and scolds John for what he was doing. Locke comments that Walt is "different," but Michael flatly tells Locke to stay away from him and his son.

As night falls on the Island, Sun notices Michael’s distant expression as he stares into the fire and asks him if he’s OK. He curtly replies that he’s fine, but says he just doesn’t understand how to communicate with Walt. Locke had said that Michael should stop treating Walt like a child, but having never been there during Walt's childhood, Michael doesn't know what else to do.

Elsewhere, Sayid and Shannon explain to Jack about Rousseau’s map, which Sayid has been critically analyzing. He’s discovered there is a point on the map, or rather the Island, highlighted on all the notes. The three surmise this could be the location of the transmitter and its power source. Michael interrupts them, telling them they have to get off the Island. He proposes building a raft out of wood and wreckage from the plane. Their pessimism does not deter Michael, who says he will do it with or without their support.

Walt sits reading a "Flash" comic book in Spanish, and Michael tries to take the opportunity to get to know his son more. Walt’s unenthusiastic responses, however, cause Michael to slip back into his ordering parent role, and he commands Walt to come with him.

Kate finds Charlie on the beach as the golden sun is setting in the sky. He asks her if she’s seen Claire's diary, which he knows she used to keep in her bag. He suspects someone has taken it.

Meanwhile, Michael and Walt arrive at their destination, a clearing full of bamboo and pieces of plane wreckage Michael has moved. Walt asks if he’s being punished, but Michael tells him they are taking control of their destiny.

Back at the beach, Kate and Charlie go to their first suspect, Sawyer. He jokes he is automatically the prime suspect when an object goes missing, but sure enough does have the diary on his person. He toys with Charlie over what Claire wrote, resulting in the two coming to blows and forcing Kate to break it up.

As Michael continues to sift through wreckage, Walt spots Locke and Boone heading into the caves. He pretends to go for water to escape Michael’s supervision. Inside the caves, Shannon and Boone exchange verbal abuse, and Shannon suggests they help Michael build a raft. Boone declines. Meanwhile, Locke tells Walt he should start respecting his father’s wishes, though Walt disagrees. Michael spots the two together again and shouts at John in front of everyone. Walt suddenly shouts himself, calling Michael a jerk and asking him where he was all his life, and telling him he is not his father. In response, Michael throws Walt’s comic book into the fire, further increasing Walt’s loathing. ♪

Not long later, Hurley tells Michael that Walt took Vincent and left. Michael says he knows where Walt's going and immediately heads after Locke. Walt isn’t with Locke, however, leaving Michael shaken as to where his son might be. Locke offers to help, and the two head out to find him.

Charlie thanks Kate for her help and says while Claire is gone, he’s crumbling inside. As she leaves, after numerous times of almost opening Claire's diary, he removes temptation by running away from the book.

Walt is out in the jungle, walking Vincent, when the dog suddenly barks madly and runs away. Walt chases after him, dropping the dog’s leash in the process. Instead of his dog, however, Walt finds something else in the jungle, which roars as it approaches.

Locke and Michael find the leash and hear Walt screaming in the distance. They find him trapped between tree stumps behind vines. A polar bear thrashes against the confined safe space, trying to get to Walt. With Locke’s guidance, the two climb up a nearby tree and maneuver themselves above Walt’s location. To help Walt, Michael gives him Locke's knife. Tying Walt to a vine, Locke pulls him to safety while Michael singlehandedly fends off the bear. ♪

As night falls, Michael finds Walt, giving him the box of letters he got back in Australia. Walt asks why his mother never gave them to him, and Michael points out that she never got rid of them either. The two look at the cards and laugh together at the cheesy jokes inside them.

Meanwhile, Charlie reads Claire’s diary, in which she writes how much she likes him. He then notices something, and tells Jack and Sayid what it says: a dream about a black rock. Sayid recalls that Rousseau said something about the Black Rock, and Charlie believes that this is perhaps where Claire was taken.

Out in the jungle, Locke uses his home-made dog whistle to find Vincent. Instead of Vincent, however, a human figure emerges from the jungle. A shaking Claire reveals herself. ♪

A flashback between Michael and Walt introduces a motif that plays during a few scenes of mourning during the series.

Retrieved from "https://lostpedia.fandom.com/wiki/Special?oldid=1093510"
Community content is available under CC BY-NC-ND unless otherwise noted.