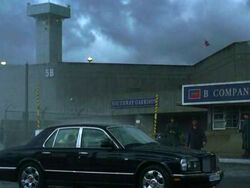 Southway Garrison is the military prison that Desmond was incarcerated at. He was incarcerated for desertion according to the paperwork that was stamped upon his release. ("Live Together, Die Alone, Part 1")

The address of the prison is:

Retrieved from "https://lostpedia.fandom.com/wiki/Southway_Garrison?oldid=1047254"
Community content is available under CC BY-NC-ND unless otherwise noted.