This article is about the Find815.com character. For other uses of "Sonya", see: Sonya (disambiguation) 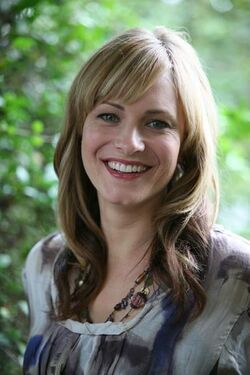 Sonya is a character in the alternate reality game Find 815. She was an Australian flight attendant working for Oceanic Airlines and was on board the doomed Oceanic 815. Her boyfriend of almost 8 years, Sam Thomas, a technician for the airline, had bought an engagement ring and had been planning to ask her to marry him. After the disappearance of the plane, he has been investigating what happened.

Someone from The Maxwell Group claimed that they knew Sonya and sent Sam a picture of her. This person described her as a lovely person, who touched the heart of everyone who knew her.

At one point during his investigation, Sam was wakened in the middle of the night by the noise of a banging window. Upon closing it, he saw a reflection of Sonya in the glass and heard a faint voice saying "love you madly". He turned around to see only an Oceanic uniform, and placed it back in the closet, considering it to be a vision.

So far, Sonya has not been seen on the Island, and it is uncertain as to whether she survived the crash.

A couple named Ian and Pam invited Sam via Email to come over and stay with them for a while. They are obviously related to Sonya, because they added that his anniversary was approaching soon and that Sonya always mentioned it. They also considered Sam like a son and offered any support he would need. They said it would help to face these things as a family. (Find 815 clues/January 15)

Retrieved from "https://lostpedia.fandom.com/wiki/Sonya?oldid=1116052"
Community content is available under CC BY-NC-ND unless otherwise noted.