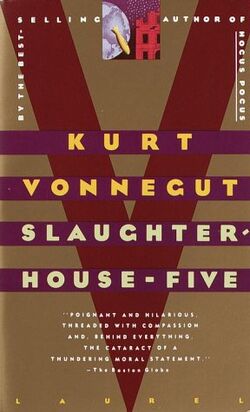 Slaughterhouse-Five is a science fiction novel by Kurt Vonnegut. The novel tells the story of a wayward soldier, Billy Pilgrim, and his experiences with time travel. The novel has had some influence on the storyline of Lost. [source needed]

Billy Pilgrim, a wayward soldier, becomes "unstuck in time" for an unknown reason during World War II. The book then chronicles his jumping from different eras of his life, from his first marriage, to the war, to his kidnapping by a race of aliens known as Tralfamadorians, and finally to his death.

This is the same theory of time travel which Lost uses and which Miles attempts to explain to Hurley (in other words, what happened happened). ("Whatever Happened, Happened") The button on Lost may be a reference to the aforementioned button that would end the world.

Retrieved from "https://lostpedia.fandom.com/wiki/Slaughterhouse-Five?oldid=994657"
Community content is available under CC BY-NC-ND unless otherwise noted.