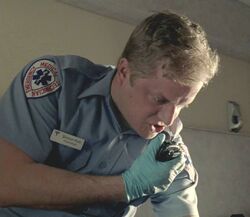 Simon Holt was the paramedic who brought Locke with the ambulance to St. Sebastian Hospital after Desmond's hit and drive. He said to Ben that Locke exhibited no responses. Ben said to him that he barely knews him so didn't know his next of kin. ("The Last Recruit")

Retrieved from "https://lostpedia.fandom.com/wiki/Simon_Holt?oldid=843798"
Community content is available under CC BY-NC-ND unless otherwise noted.