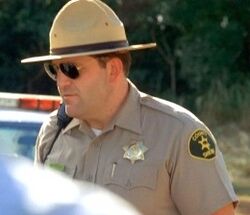 Sheriff Williams appears in Locke's flashback, stops Locke and Eddie on the roadside and asks for Locke's ID. Locke then tells him that he has guns on the back of the truck, and that the guns' licences are on the back as well. The Sheriff says that he will arrest Locke for picking up a hitchhiker, but Eddie quickly interjects, saying that Locke is his uncle. ("Further Instructions")

The Sheriff wears a name tag with "Williams" on it; however this character is listed simply as "Sheriff" in the ABC Medianet press release for this episode.

Retrieved from "https://lostpedia.fandom.com/wiki/Sheriff_Williams?oldid=1095282"
Community content is available under CC BY-NC-ND unless otherwise noted.