Sharks have played a subtle, but present role on Lost. A shark with a distinct DHARMA Initiative logo on its tail attacked Sawyer and Michael when they were on the raft. ("Adrift") A shark with a DHARMA Initiative logo was seen swimming near the four toed statue when the island was submerged in the flash sideways world. ("LA X, Part 1") The DHARMA Initiative experimented on sharks and dolphins in the aquarium that Jack was imprisoned in the Hydra. ("A Tale of Two Cities")  (The World of the Others) The blast door map makes reference to a selective breeding program for Carcharodon carcharias (The Great White Shark). There have also been references to sharks in The Lost Experience.

When Sawyer and Michael were drifting in the ocean on pieces of wreckage after the destruction of the second raft, the two men heard pounding on the remains of the raft. After seeing a distinctive fin they quickly realized they were being followed by a shark, possibly attracted by Sawyer's bleeding. When the men later decided to board one of the raft's remaining pontoons, the shark attacked. Michael however fired Sawyer's gun several times and was able to injure the beast, which quickly broke off its attack.

At one moment, a glimpse of the shark's tail underwater was seen. The Shark had an unknown DHARMA logo on its tail, indicating a connection to the DHARMA initiative. In the Swan Orientation Film, one of the topics listed as being studied through the DHARMA Initiative is zoology, which may account for the shark. It should be noted that this logo is very likely the normal DHARMA logo.

In the flash-sideways timeline, a shark with a DHARMA logo inhabits the area around the sunken Island. ("LA X, Part 1") Whether this shark is intended to be the same shark as in the original timeline is unknown.

Sharks in the Hydra

Juliet mentioned to Jack that the room in which he is imprisoned was used for sharks and dolphins. It contains chains and a crude 'operating' table. It is part of an aquarium.

Sharks in the The Lost Experience

The DJ Dan conspiracy site has a photograph of a shark carcass allegedly found off Australia's Great Barrier Reef. A DHARMA logo is pictured on the tail of the shark carcass. It is The Swan Logo. DJ Dan's podcast of June 8 indicates that the shark was discovered by a listener, who took the photograph and sent it to him.

In the clues released by the hacker Persephone on June 7 another shark carcass was seen. Accessed via the Institute for Genomic Advancement page on the The Hanso Foundation website (now offline), the clues consisted of several pictures of a tropical forest and a beach. On this beach a shark was visible. On close-up this shark was branded with the Swan logo as well. 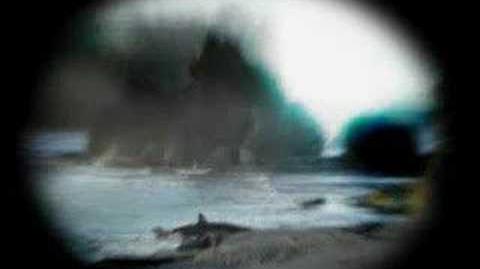