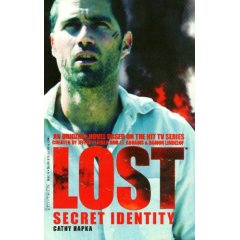 Secret Identity is a semi-canonical novel written by Cathy Hapka. The main character is Dexter Cross, who awakes from the Oceanic Flight 815 crash with strange gaps in his memory, a missing girlfriend, and a doppelganger stalking other survivors on the island. This is the second Lost novel and was released January 1, 2006. The front cover features Jack. This book is available as a paperback, eBook, and audio-cd, and has been translated to other languages.

“Do You Want To Know A Secret?”

There are things no one knows about Dexter Cross. His friends believe he’s just another moneyed Ivy League student. But Dexter is leading two lives – until a fateful trip to Australia exposes the truth.

Dexter books the first flight out of Sydney, wanting nothing more than to return home after his deceit is revealed. The plane he boards, however, never reaches its destination. Instead, Oceanic Flight 815 crashed, trapping Dexter on a remote island forcing him to make a decision.

Faced with a blank slate, Dexter reinvents himself again. When tragedy strikes, his carefully constructed farce begins to crumble, and Dexter must trust his fellow castaways with the truth.

But Dexter isn’t the only one lying. And he quickly learns that on he island there are many unknowns, but none are deadlier that the secrets of its inhabitants.

Back at home, Dexter Cross lived in a rundown area of America with his mother and aunt Paula. Although he does well in school, he is bullied and knows he has no hope of getting into college due to his family's lack of funds. However, after an accident in a supermarket his aunt receives a large amount of compensation money and as a present for Dexter she pays his college fees.

At college Dexter fits in a lot easier than he thought he would. However, he does not tell anyone he knows about his real family and reason for being at college, instead he tells all his new friends that he is from a rich family and everyone he knows goes to college. At college, he meets a girl called Daisy who he hits it off with. He hates hiding his secret from Daisy, and hates making up excuses not to spend his holidays with her. In the end he runs out of excuses and ends up going on holiday with Daisy and her family, thankfully with Dasiy's parents paying all expenses. Daisy's parents leave for Japan half way through the holiday, leaving Dexter, Daisy and Daisy's brother. On the last night of the holiday on the way back throuh the hotel the group is mugged, and the thiefs take all Daisy and her brother's money. At this point the only money the group have is Dexter's, and he has none. He is forced to tell Daisy his secret and she storms off. The next day, Dexter goes to the airport to get the plane but can't find Daisy anywhere. He decides she must have changed seats and he will look for her on the plane. When he is on the plane, Daisy's brother apears, and tells Dexter that Daisy doesn't want to see him anymore, but he doesn't know if she got on the plane either, as their new seats are apart, and she didn't go with him to the airport. Dexter decides to get up and look for her, but the fasten seatbelts sign turns on and the plane crashes.

On the island after the crash, Dexter wakes up dehydrated and confused. He can't remember the real him, and remembers his life like he pretended it was in college. He knows he should look for Daisy, but doesn't feel very motivated to, as he can remember them arguing about something before the flight. However, other survivors, including Claire, begin to see Dexter in the jungle, even though he isn't. Dexter eventually begins seeing himself as well and chases 'himself' into the jungle. He finally catches up with himself as he is standing in the jungle next to 'Daisy'. The other Dexter reminds the real Dexter of his real past and finally he remembers. At this point, the other Dexter and Daisy disappear, and Boone and Shannon are standing in their place. They take him back to the beach in his delirious state. At the beach when he is feeling better another survivor, George, brings him a suitcase with "Dexter Stubbs" on it, not Dexter Cross, the name the fake Dexter used. He confesses all to the other survivors who welcome the real him with open arms.

Retrieved from "https://lostpedia.fandom.com/wiki/Secret_Identity?oldid=1050592"
Community content is available under CC BY-NC-ND unless otherwise noted.