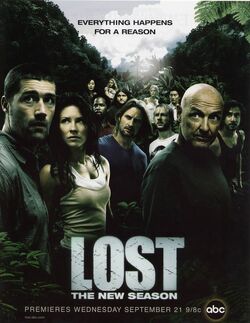 This article contains episode summaries for the second season of Lost.

In the U.S., original episodes of Season Two aired between September 21, 2005, and May 24, 2006. For airdates on other networks and in other countries, see Airdates.

*Credited as a guest star until "Everybody Hates Hugo".

**Not a cast member until "Everybody Hates Hugo".

***Credited as a series regular through "The Other 48 Days", then as a special guest star in "Collision".

****Only credited as a series regular in the episodes he appeared in.

*Not credited in the episodes he appeared in.

After having opened the Hatch at the end of Season 1, it is revealed to be a research station, which has running water and electricity, is well stocked with food, and has a 1970s era computer, which, according to its previous occupant, Desmond, must have the Numbers 4, 8, 15, 16, 23, and 42 typed into it every 108 minutes, or "the world will end." The computer was broken during the first foray into the Swan station, and Desmond flees, expecting impending doom. Sayid, however, was able to fix the computer.

The survivors debate whether or not to trust Desmond's instructions, but set up shifts to keep watch and enter the numbers, having repaired the computer. They gradually learn through bits of filmstrip that what they had previously referred to as "the Hatch" is actually the "Swan station", one of several different DHARMA Initiative stations present on the Island. Shannon, while searching for Vincent the night the Hatch is opened, stumbles upon Walt, who, soaking wet and speaking backwards, appears and disappears right before her very eyes. Shannon believes something happened to the rafters, and her suspicions are confirmed when Claire and Shannon find the bottle of messages the rafters took with them to give to the mainland, washed up on the beach.

Sawyer and Michael create a makeshift raft from floating wreckage after the attack on their raft, the disappearance of Jin, and abduction of Walt. The currents push them back to the Island, where they encounter a panicked Jin, and then the tail section survivors, who are led by Ana Lucia, and include Libby and Mr. Eko. Ana Lucia initially directs that they be held captive, but they eventually reconcile, and head to the other side of the Island to reunite with the rest of the survivors. Meanwhile, Shannon receives yet another visit from Walt and realizes that something has happened to him and insists to Sayid that he needs her help. Shannon and Vincent go through the jungle to find Walt. Sayid tracks her down and tries to stop her. She breaks down and tells him that he's going to abandon her, just like everyone else in her life. After they admit their love for each other and reconcile, Shannon sees Walt once again in the jungle, talking backwards. She runs after him. A startled Ana Lucia mistakes Shannon for one of The Others. She fires a shot and kills Shannon. The experience of the tail section survivors on the Island is explored, and it is revealed that The Others kidnapped a total of 12 members of their group, which had been infiltrated by Goodwin. The two communities merge under awkward circumstances as Sayid is heartbroken that Shannon has died. Ana Lucia, who feels guilty about Shannon's death, feels uncomfortable among the group and like an outcast. She eventually befriends Jack and gains the acceptance of Sayid, who finally admits that Shannon's death was not of her fault, but he instead blames The Others.

Claire wrestles with the decision of whether or not to trust Charlie, who at one point suffers delusions that he has to protect the baby, but ends up endangering the child. There is some doubt on whether he is using the drugs found at the Beechcraft, however he eventually keeps his distance. Charlie takes Eko to the plane, and he grieves over the death of his brother, who was on the very same plane. This inspires Eko to have faith in the island and what it has in store for him, and he begins building a church on the island to repay his debt to Yemi.

The Others become a more visible presence in this season. One prominent Other, Tom (the man from the raft who took Walt), tells the survivors, "This is not your island, this is our island, and the only reason you're living on it is because we let you live on it." Later, when the baby falls ill, Claire explores the Staff for medicine, another DHARMA station, and it is revealed that Tom's beard is fake; the Others may be lying about their true nature.

Rousseau captures a man who identifies himself as "Henry Gale, from Minnesota", another castaway on the Island who had crashed there by balloon. The survivors doubt his story, particularly Sayid, who holds him captive in The Swan and brutally interrogates him as he places the blame on them for Shannon's death.

Locke, who became trapped in the living area of the Swan during a strange "lockdown" procedure before he could enter the number codes, asks Henry Gale to enter them by crawling through the air vents. As the countdown reaches zero, a map appears on a blast door, detailing an arrangement of stations on the Island. Later, Gale claims to have never entered the code as everything returned to normal. When faced, however, with proof of his deception (the ID of the real Henry Gale), "Gale" admits that he is indeed one of "The Others". The event, however, tarnishes Locke's faith in the whole system, and in the Island itself.

Following dreams and the blast door map, Eko and Locke discover the central "?" (Pearl) station, which appears to be a station designed to observe the occupants of the other stations. Due to this observation of the Swan station, Locke believes that entering the Numbers is merely a psychological experiment. This puts Locke into a crisis of faith, but seems to make Eko even more sure of what he must do (entering the numbers).

Michael continues to seek his kidnapped son, Walt. After having communicated with him on the Swan's computer, he leaves the survivors to chase after his son, but is captured. Arriving at a collection of huts that seem to be the Others' camp, he is allowed to spend three minutes with his son. The Others let Michael go, promising him Walt back, if he frees Henry, and brings Jack, Kate, Sawyer, and Hurley back to their camp. He returns to The Swan, kills Ana Lucia and Libby, frees Henry, and shoots himself in the shoulder, making it appear that Henry committed the murders and escaped. During the two survivors' memorial, Desmond returns to the Island in his sailboat.

Michael convinces Jack, Kate, Sawyer, and Hurley to join him in a raid against "The Others" to rescue Walt, but Sayid believes that Michael is leading the four into a trap. His plan is to use Desmond's sailboat to approach The Others' camp by water. He enlists the aid of Jin, who knows how to sail, and Sun, to translate. (Sun, earlier in the season, is revealed to be pregnant, even though Jin is infertile).

Despite Jack's foreknowledge of Michael's plans, The Others ambush and capture them. Henry, who turns out to be The Others' leader, fulfills the deal, freeing Michael and Walt and giving them a boat. Hurley is freed and instructed to go back to his camp to tell the other survivors that they may never go back there.

In the meantime, Sayid, Sun and Jin, arrive at The Others' camp, which has been abandoned. They start a signal fire, and wait for Jack and his party to rendezvous with them.

Locke and Desmond take over the The Swan station from Eko and prevent him from entering the Numbers at the appointed time. Both of them argue over the validity of the threat until the last minute when Desmond realizes the last time the code was not put through was the day of the plane crash, explaining that the magnetism from the station was the cause of the crash. When the timer reaches zero, a great magnetic field erupts. Desmond goes to the system termination station under the floor, which he activates by turning the key. The immediate result is not shown, but the entire island is enveloped by a white-violet light and a shrill humming sound.

The season ends with a scene of a cramped polar research station where two men excitedly notice what appears to be the anomaly, and they proceed to phone Desmond's old fiancée, Penelope, to tell her that they have "found it".

Many of the character's lives before the crash continue to be explored, and they are detailed here:

Man of Science, Man of Faith

Two for the Road

Retrieved from "https://lostpedia.fandom.com/wiki/Season_2?oldid=1116932"
Community content is available under CC BY-NC-ND unless otherwise noted.