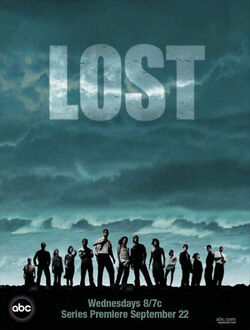 This article contains episode summaries for the first season of Lost.

In the U.S., original episodes of season one aired between September 22, 2004 and May 25, 2005. For airdates on other networks, and in other countries, see: Airdates.

*Only credited in the episodes she appeared in, until "Outlaws" when she became a full series regular.

* Christian Shephard appeared in "Walkabout", but was not portrayed by John Terry. (Walkabout audio commentary)

Emilie de Ravin was initially billed as a guest star in press releases and only credited on screen when she appeared (through "Hearts and Minds"), leaving the actual initial main cast of the show at 13 actors instead of 14. She became a full series regular after the show was picked up for a full season and the first episode of the pickup after the initial 13-episode order ("Special") not coincidentally featured the return of her character. Emilie was subsequently credited on screen even when she did not appear and was bumped up to main cast billing in press releases.

Season 1 concentrated on the middle-section survivors and their fight for survival and rescue. Major plot points included:

On September 22, 2004, a plane breaks apart in mid-air, scattering survivors on a remote island somewhere in the South Pacific. Forty-eight of these survivors, after the initial shock passes, attempt to set up a camp and figure out where they are, but are disturbed by loud roaring noises and crashing trees emanating from the nearby jungle.

Three of the survivors, Jack, Kate, and Charlie, set out to find the plane's cockpit. An injured pilot tells them that the plane had lost radio contact six hours after take off, turned back for Fiji, and hit turbulence. The plane was a thousand miles off course when it crashed. The Monster rips the pilot from the cockpit, consequently killing him, and the remaining three run for the beach.

Jack, a spinal surgeon from Los Angeles, discovers a mugshot of Kate, with whom he has begun a close friendship. After initial mistrust and the death of the Marshal, whom he tries to save, both of them agree to start afresh.

One of the survivors, a former Iraqi Republican Guard communications officer named Sayid, attempts to repair the transceiver from the plane. A few survivors (Sayid, Boone, Shannon, Charlie, Kate, and Sawyer) trek high into the mountains in an attempt to get a signal, and are attacked by a polar bear along the way. When they finally do turn on the transceiver, they learn that its signal is being blocked by a transmission of a woman's voice speaking in French, which Shannon translates as: "I'm alone now, on the island alone. Please someone come. The others are dead. It killed them. It killed them all." The message repeats with an automated count implying, according to Sayid's calculation, that it has been repeating for over sixteen years and five months. Coupled with the pilot's last words, the survivors' hopes of rescue are dampened; and despite the group trying to keep the discovery undercover, the news spreads through the camp throughout the first few days.

When food supplies run low, Locke leads the first hunting party for boar. As Kate's resourcefulness comes in handy, Michael and Walt, father and son, struggle to get along. On the sixth day, a woman drowns, and a young man named Boone tries to prove his worth. Jack goes on a spiritual quest when he begins to see visions of his deceased father on the island, and begins a science versus faith conflict with Locke. Eventually, the group of survivors split in half, whilst a few moved inland to a cluster of caves with fresh water and protection. Others stayed at the beach in hopes of rescue, and they moved once again when the tide began to carry the wreckage of the plane into the sea. Jack becomes the de facto leader. Intense rivalries emerge when disagreements on allocation of supplies becomes an issue, especially between Jack, Sayid and Sawyer. As conflict comes to head, Sawyer is accidentally stabbed in the arm by Sayid, who then leaves the camp in shame for hurting Sawyer.He begins a journey of walking down the beach alone, telling Jack not to come after him.

Sayid finds a cable running out of the ocean and into the jungle. When he follows it, he encounters Danielle Rousseau, the French-speaking woman from the repeating transmission. She tells Sayid how she came to be on the Island, and implies she killed those she arrived with. Sayid eventually escapes with some of her papers, with potential knowledge of a group of hostile individuals, The Others, on the Island, who kidnapped Rousseau's baby daughter. Over the course of the season, Rousseau has other intermittent contact with the survivors.

Trying his best to make life on the island as comfortable as possible, Hurley conducts a census of the survivors, and discovers that one of their castaways, Ethan Rom, is not on the passenger manifest. Ethan kidnaps the pregnant Claire and Charlie, and attempts to hang Charlie, but he's rescued by Jack and Kate. Two weeks later, Locke finds Claire stumbling through the jungle, completely distraught with amnesia. This starts many confrontations between the survivors and the Others, which, in turn, leads to the death of one other survivor and Ethan himself, whom Charlie kills for revenge.

There are fleeting confrontations with polar bears, the Monster and Danielle Rousseau. Violence is sporadic, but the survivors' close-knit society is held together due to the de facto leader Jack, the level-headed Kate, Sayid and Hurley, along with distant hunter Locke, who appears to have some supporters among the survivors despite disagreements with Jack, such as the young couple Charlie and Claire, and Boone. However, Locke begins to converse with Walt and teaches him to throw knives, angering his protective father Michael. Sun eventually reveals she speaks English, causing a momentary lapse of trust in her husband, Jin.

After two weeks, Locke and Boone discover a mysterious hatch on the ground with no handle, and Locke become obsessed about what may be inside. Under the guise of unsuccessful boar hunting, they spend many days covertly pondering and excavating it. While exploring the island, Locke and Boone also discover a Beechcraft lodged on the side of a cliff. Boone climbs up the cliff into the plane. Inside, he finds a radio and sends a distress call. A male voice answers, "Is someone out there?" to which Boone responds, "We are the survivors of Oceanic Flight 815." The voice replies, "We're the survivors of 815." The Beechcraft then falls from the cliff and badly injures Boone. Locke takes Boone back to the camp, but Jack is unable to save his life. At the same time, Claire goes into labor and Kate delivers the baby.

Michael decides to build a raft to escape with his son Walt, and they are joined by Sawyer and Jin. In the first night after launching, they are surprised and initially delighted to encounter another boat, but it turns out to carry a group of the Others who demand that Walt be handed over to them. In the ensuing chaos, the raft is destroyed, Sawyer is shot, and Walt is kidnapped.

Rousseau leads a party of survivors to the Black Rock, a wooden ship in the middle of the island, containing a cache of dynamite which can be used to open the hatch. Along the way, one of them is chased by The Monster, manifested as a black cloud, which Rousseau calls the island's "security system." Jack and Locke bring the dynamite back to the hatch, and use it to force open the hatch door to look inside. The season ends with them looking down into the darkness of the shaft below.

Many of the character's lives before the crash are explored, and they are detailed here:

Note 1: Shannon Rutherford, although a main character, was devoid of a flashback episode dedicated to her and her alone, but she still has a mini flashback in "Exodus part 1". Note 2: Many connections between the survivors before the island become increasingly apparent later in the season.

House of the Rising Sun

All the Best Cowboys Have Daddy Issues

Whatever the Case May Be

Retrieved from "https://lostpedia.fandom.com/wiki/Season_1?oldid=1117014"
Community content is available under CC BY-NC-ND unless otherwise noted.