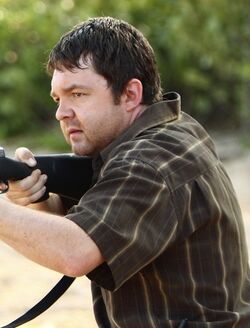 Seamus was a scientist who worked for Charles Widmore in 2007. He was brought to the Island as part of support team. He was killed by the Man in Black, while guarding the caged Candidates.

Alongside Zoe, he was part of the team that accompanied Widmore to the Island. When Zoe failed at gaining Sawyer's trust and was held at gunpoint, she whistled and Seamus, alongside two of his compatriots, emerged from the tall grass and ambushed Sawyer. ("Recon")

Seamus was present when Widmore's team assaulted the Man in Black's camp. As they leaned over a comatose Jin, Seamus asked, "Is this the guy?" to which Zoe affirmed. After the Man in Black discovered that his camp had been ambushed he went to Hydra Island to speak to Charles Widmore. As he approached the makeshift pylons several warning shots were fired at him by Seamus, along with a handful of others. Seamus stood careful guard as the Man in Black declared war on Charles Widmore. Later that night, Seamus and Zoe went to the submarine to bring Charles 'the package', which turned out to be Desmond. ("The Package")

In the control room of the Hydra Station, Seamus prepared to activate the solenoid coils room. He tells Zoe that they aren't even close to being ready. They test the generator at full power but a circuit soon fails. Seamus sends a technician named Simmons to check the circuit on the solenoid coils in the central structure outside. Seamus tells the white rabbit, Angstrom, that he is going in there next. Seamus notices another technician flipping a switch and realizes that Simmons is inside the solenoid coils room. Seamus and Zoe run down to the room and find Simmons smoking and dead, his face charred. ("Happily Ever After")

Seamus brought the Candidates and their allies to the cages on Hydra Island. However, he made a poor guard and was disarmed by Sawyer, forcing Widmore to take over his duties. Widmore threatened Kate, which prompted Sawyer to give up his weapon so Seamus could lock him up. Soon after, the Man in Black attacked in his Smoke Monster form and killed Seamus. ("The Candidate")

Kate attempted to take the keys to the cages off of Seamus' dead body, but was unable to reach. Jack took them from him and freed his friends. ("The Candidate")

Retrieved from "https://lostpedia.fandom.com/wiki/Seamus?oldid=1106042"
Community content is available under CC BY-NC-ND unless otherwise noted.