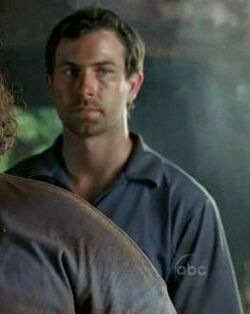 Scott Jackson was a middle section survivor of Oceanic Flight 815. His character was commonly mistaken for Steve Jenkins, a confusion that became a running joke in the script. Scott survived on the Island for 28 days before he was murdered, most likely by Ethan Rom.

Scott worked in sales for an internet company and lived in Santa Cruz. He had won a two-week vacation in Australia and was returning home when the crash occurred. The day of the flight, he walked past Nikki and Paulo while Boone asked them to borrow a chair from their table at the Sydney Airport. ("Homecoming") ("Exposé")

According to Dustin Watchman, Scott was friends with Steve before the flight, and they had traveled to Australia together. [1]

Scott first appeared during the initial aftermath of the crash and was one of the many who helped the injured directly after the crash. Scott joined others that night to hear the roars and sounds of the Monster emanating from within the jungle. After the group began to panic about their supplies, Sayid made a speech about forming teams to gather items from the wreckage, and he was present to hear this. ("Pilot, Part 1") ("Tabula Rasa")

The next day, he helped gather wood for the mass funeral and attended the funeral for crash victims. The next day Scott and the camp saw a woman drowning in the sea, but they were unable to help her. That night, when the group turned on Boone for stealing water, he was with "SBSSG" and listened to Jack make his "live together, die alone" speech. ("Walkabout") ("White Rabbit")

Scott and Steve formed a friendship of sorts on the Island, which was most likely what led to people mistaking them for each other. After Jack made a decision to move into the jungle and use the caves as a suitable living space, Scott and Steve decided to stay on the beach. On Day 8, Scott was with Steve and Jerome at the beach when Charlie rushed to the beach to inform the survivors that Jack was caught in a cave collapse. Michael asked Scott and Steve to help him, however mistaking them for each other. He was then seen trying to help. ("The Moth")

Scott and Steve were also present for Hurley's "Island Open" golf tournament and Jack's climactic putt. After the attack on Claire in the caves, Scott and Steve helped Hurley look around for who possibly attacked her. The next day he and Steve were at the beach folding clothes, while Hurley conducted his survey. ("Solitary") ("Raised by Another")

Scott was at the caves when Jack asked the group if they had seen Ethan. ("All the Best Cowboys Have Daddy Issues")

On day 28 Scott's corpse was found on the beach, with several broken bones, battered and bloody. He was allegedly murdered by Ethan when the group did not give Claire back, as he said he would kill the rest of the group one by one. Scott was the first person buried in the survivors' graveyard, and Hurley gave his eulogy at his funeral and apologized for mistaking him for Steve so often. ("Homecoming")

Retrieved from "https://lostpedia.fandom.com/wiki/Scott_Jackson?oldid=1105904"
Community content is available under CC BY-NC-ND unless otherwise noted.