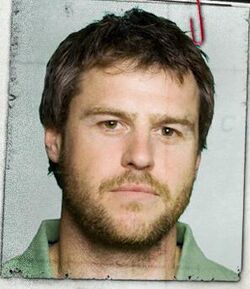 This is an article about the Find815 character named "Sam Thomas". For the associate producer see Samantha Thomas.

Sam Thomas is the main character in the storyline of the alternate reality game Find 815. When Sam's girlfriend of 8 years disappears on Flight 815, Sam loses his job with the Oceanic Airlines as he begins to question the company's motivation to find out what really happened to the plane. While the airline is deciding to abandon their search attempt to find the doomed flight, and the world is preparing to officially declare all passengers as deceased, Sam remains defiant that he will uncover the truth no matter the cost. When Sam is suddenly contacted via mysterious emails, he sets out on a journey that ultimately leads him to discover the 'truth' about what happened to his partner.

Before the Crash of Oceanic 815

According to his MySpace account, Sam Thomas comes from New South Wales, Australia. He was with his girlfriend Sonya for almost eight years before she disappeared while working as a flight attendant on Oceanic Flight 815. At the time, Sam was also an IT Technician for Oceanic Airlines. Sam had planned to propose to Sonya before her disappearance, on their anniversary which Sonya always talked about to Ian and Pam.

After the Crash of Oceanic 815

Sam is shattered by the disappearance and possible death of Sonya, and conveys his disapproval publicly about Oceanic Airlines and their decision to call off the search for Flight 815. This proves embarrassing for the airline who, after repeated verbal and written warnings, dismiss Sam from his position within the company due to his "derogatory and unauthorised comments". (Find 815 clues/January 3)

Sam is determined to find out the truth about the plane's disappearance no matter the cost, and his room is seen to be covered in maps and information that he hopes will help him in finding the plane. After his appearance on the news, Sam received an email from someone who says that he or she knew Sonya. Attached in the email is an image of her, but Sam notices incongruities in the image. Sam finds four hidden messages upon closer inspection of the image: Sunda Trench, Christiane I, Black Rock and "Tell no one - Grave Consequences". By replying and then examining source code from an automated response, Sam discovers that the email has something to do with The Maxwell Group, and finds the "Sunda" Islands on his maps.

Sam contacts his friend Tracey R for help, and is informed that the Christiane I is in fact a salvage boat docked in Jakarta, preparing to leave on a mission to find a shipwreck in some of the deepest waters on the planet. Deciding that his only option is to board the ship and investigate himself, Sam uses his aviation contacts to get on a flight short-notice from Sydney to Darwin, and then on to Jakarta. At the same time, he attempts to find employment at another airline, Austral Air.

Chapter 2 - The Christiane I

Under the guise of a traveler who just wants to get away, Sam finds the Christiane I and attempts to join the crew on their expedition. The ship's captain, Mr. Ockham, however refuses to take on what he describes as cash-strapped tourist, saying that Sam will just be dead weight. When the boat's char plotter breaks, Sam manages to fix it, convincing the captain that he can and will earn his keep as a crew member. Sam also meets Oscar Talbot, the expedition supervisor representing the company behind the salvage mission. Talbot seems immediately skeptical of why Sam wants to join the crew, having already gained knowledge of everyone else on the ship due to having "too much at stake" in the operation. Talbot also momentarily unnerves Sam by stating that he must have a perfect girlfriend. Though Talbot disapproves of Sam joining the expedition, he concedes due to Ockham's warning that more electrical equipment could require fixing because of the remote region they are journeying to, making Sam a valuable asset. After having joined the crew, Sam receives a mysterious email.

With his place on-board the vessel now assured, Sam now turns his attention to the Black Rock message on the image of Sonya. He contacts Tracey R asking if she has any further information for him, and also gives her Talbot's name for further research. She replies that she's still working on Black Rock, but has uncovered some details about Talbot, including that he has some suspicious connections to diamond trade. She advices Sam to avoid Talbot. Around the same time, Sam picks up a news broadcast on his radio about the disappearance of Amelia Earhart. Notably, the broadcast appears to be a primary source from around the time of her disappearance in 1937. Emailing the Broadcasting Authority, Sam is told that the transmission was probably caused by amateur radio enthusiasts who like to play historical recordings. However, Sam's video camera also malfunctions around this time, suggesting some electronic interference just like Ockham warned.

Tracey later contacts Sam, giving him some details about Black Rock. These details prompt Sam and Tracey to surmise that the Christiane I's mission is to find the wreckage of the ship called the Black Rock. Believing that the mission is in fact innocent, Sam decides that there are no answers about what happened to Flight 815 on the ship, and resolves to leave the boat at the next port.

Sam finds Ockham and tells him he wishes to leave the ship at Christmas Island, but is informed that the ship cannot go off course in its search for the Black Rock. Sam questions exactly how much Ockham knows about Talbot's employers, and learns that Talbot represents a "syndicate". Sam later sees Talbot leave his quarters, and sneaks in undetected. He finds a document for the expedition, with the logo of the Maxwell Group on its cover. The document also states that the Maxwell Group is a division of Widmore Industries. Talbot finds Sam leaving his room, raising his suspicion and mistrust that Sam is not who he says he is. (Find 815 clues/January 14)

Some time later, Sam notices that more electrical equipment appears to be malfunctioning. He contacts Tracey about it who says it was probably lightning or even shortwave electromagnetic energy. Sam also investigates the origins of the name Maxwell, with the pioneer of electromagnetism James Clerk Maxwell being especially noteworthy. Sam resolves that it may be worthwhile to stay on the Christiane I after all, considering the now established link between Talbot and the Maxwell Group. Furthermore, he was managed to decipher the mysterious email he received just after joining the crew: a set of co-ordinates. Sam plans to pinpoint these co-ordinates on the ship's chart plotter. (Find 815 clues/January 18)

One night, Sam is walking along the deck and notices strange green lights out at sea. Contacting Tracey R, Sam is told that they were probably an aurora caused by magnetic forces around the atmosphere. However, auroras usually occur around polar regions and should not fade as quickly as the one Sam saw. Tired of the confusion and riddles that abound on the Christiane I, Sam decides to find Black Rock by going to those co-ordinates, which in turn could help him find the answers he wants. (Find 815 clues/January 25).

Sam confides in Ockham about the co-ordinates and his suspicions that the Black Rock is in that location. Ockham decides to let Sam investigate the grid reference. Talbot confronts Sam just as they reach the co-ordinates. Talbot claims that Sam took the co-ordinates from his captain, and that they are merely one grid reference as part of a number documented in the Black Rock's journal which his employers are in possession of. Talbot orders Ockham to return the ship to its planned grid sweep, but suddenly the sonar sounds to signal that something is in fact at these co-ordinates. As the crew prepare to investigate the source of the sonar response, Sam hears Sonya's voice while out on deck. Ockham assures him, however, that it is just the wind playing tricks. After the weather clears, Sam pilots an ROV (remotely operated vehicle) and discovers that the source of the signal is not Black Rock, but the supposed wreckage of Oceanic Flight 815. While Ockham looks stunned and Talbot pensive, Sam bursts into tears at the discovery.

The world now learns of this discovery, and Oscar Talbot appears on television discussing the "extraordinary twist of fate" that led to Sam finding the plane. Over a month after the end of the story, the Find 815 website updates with a message from Sam. It states that while the world once more considers Flight 815 a closed book, Sam still does not have all answers he needs.

Retrieved from "https://lostpedia.fandom.com/wiki/Sam_Thomas?oldid=1017742"
Community content is available under CC BY-NC-ND unless otherwise noted.