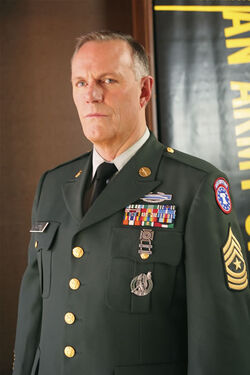 Sam Austen was the man Kate believed for many years to be her biological father. He and Kate shared a great bond, and they shared activities with each other. For example they went hunting together, which is how Kate learned her tracking skills. He worked as a Sergeant Major in the US Army, in either the 1st, 2nd, or 3rd Battalion, 75th Ranger Regiment. He was married to Diane Janssen, Kate's mother, but the relationship broke down, most likely due to the prolonged occasions when Sam was required to travel.

Sam served in Kuwait during Desert Storm. It was during this time that he encountered Sayid Jarrah and, along with Kelvin, was among the soldiers who released him. ("One of Them")

Years later, Kate, then a federal fugitive, confronted Sam at his Army recruitment office after she learned he was in fact not her biological father, as he was stationed overseas prior to her conception. However, Sam still loved Kate, even if she was not his blood kin. Sam told Kate he would have to call the authorities, but that he would give her a head start. They said their final goodbyes, and Kate left. ("What Kate Did")

U.S. Army personnel wear a patch on the right shoulder to reflect assignment to a unit engaged in combat. Sam Austen would not have been old enough to have been assigned to the Sixth Army when it was last engaged during WWII.

The light-blue and white ribbon worn to denote service in Korea is the Korean War Service Medal, which, as the name states, was awarded for service in the actual Korean War (27 June 1950 and 27 July 1954). This is not to be confused with the, Korean Defense Service Medal, which is still being awarded to all military personnel stationed in South Korea for one consecutive year. It is highly unlikely that Sam Austen served during the Korean War due to age, as well as not displaying any ribbons for service in the Vietnam War. It would be highly unlikely for a soldier with his qualifications to go the entire length of the Vietnam War without having been deployed.

Retrieved from "https://lostpedia.fandom.com/wiki/Sam_Austen?oldid=1114253"
Community content is available under CC BY-NC-ND unless otherwise noted.