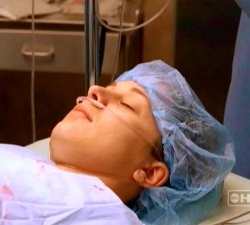 Sabine was a member of the Others who died on the operating table of the Staff after becoming pregnant. According to Juliet, she was one of nine pregnant women to die on the Island. ("One of Us")

Sabine was one of the women among the Others who volunteered to become pregnant, even though she knew it was a risk. Despite the best efforts of Juliet, her body turned on her during pregnancy. Ethan attempted surgery to save either her or her baby, but she died during the operation. Ben later attempted to console Juliet by telling her that Sabine was the one who chose to become pregnant. ("One of Us")

For fan theories about these unanswered questions, see: Sabine/Theories

Retrieved from "https://lostpedia.fandom.com/wiki/Sabine?oldid=1116028"
Community content is available under CC BY-NC-ND unless otherwise noted.