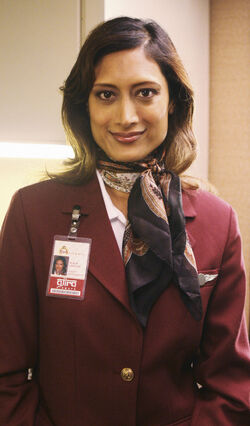 Rupa Krishnavani was an Ajira Airways flight attendant aboard Ajira Airways Flight 316. She checked the boarding pass and tickets of the passengers as they boarded the plane. A few minutes later, she handed Jack Locke's suicide note saying that security had found it while processing the coffin prior to it being put in the cargo hold. Later, Jack got up and walked toward Rupa, requesting to speak to the captain after having heard his announcement. She instructed him to take a seat as she went to summon Frank. When the plane was engulfed in the flash of light and under heavy turbulence, she was seen being thrown about the cabin. ("316")  ("Namaste") It is presumed she died in the crash, as she is the only person from the plane not seen on the beach. If she survived the crash, it is likely she was killed alongside the rest of the Ajira 316 survivors. ("Recon")

Retrieved from "https://lostpedia.fandom.com/wiki/Rupa_Krishnavani?oldid=1074982"
Community content is available under CC BY-NC-ND unless otherwise noted.