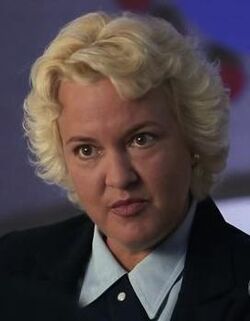 Roxana Castillo was an Oceanic Airlines ticket agent who approached by Sun at Heathrow Airport. As Sun asked for a ticket to Los Angeles and handed over her passport, Roxana told her to wait a moment. Sun was taken to a interrogation room where she was locked up, and approached by Charles Widmore, who claimed that "they" (presumably the airport staff or the Oceanic Airlines employees) acted on his instructions.

Retrieved from "https://lostpedia.fandom.com/wiki/Roxana_Castillo?oldid=1112803"
Community content is available under CC BY-NC-ND unless otherwise noted.