Lostpedia
Register
Don't have an account?
Sign In
Advertisement
in: Videos, Island locations, The Others,
and 4 more
English

"The New Man in Charge"

Room 23 is a locked room in a facility within the Hydra compound where Karl and Walt were held by the Others, and Karl was subjected to a brainwashing video. In 2007, Charles Widmore held Jin-Soo Kwon captive in the room. The DHARMA Initiative originally used the room to trigger amnesia in the Hostiles after interrogating them, so as not to violate the Truce. ("The New Man in Charge") After The Purge, however, it was co-opted by the Others. (Access: Granted) The facility bears the Hydra logo, although it appears to be separated from the rest of the Hydra station. Room 23 is located at the end of a hall. The door next to it leads outside. Behind it is a stairwell because the terrain is lower at the backside of the building than at the front side.

Walt was held at Room 23 by the Others some point after they took him off the raft. According to Ben, Jacob wanted Walt there because he was important and special. However, Walt posed a greater threat to the Others than they expected, as he had been doing something unspecified in the room that frightened them so that they would not go in to see him. Ben responded to a particular situation with a blaring alarm and people in commotion, where Juliet suggested that Ben take responsibility and bring Walt back to his father. Ben refused, and Juliet took him outside to show what Walt had done: a group of dead birds were lying on the stairwell beneath a boarded up window. ("Room 23")

Walt later told Michael that the Others made him take tests, after which Beatrice Klugh became agitated and threatened to put Walt in the room again. Walt instantly froze up at the mention of this. ("Three Minutes")

Karl was subjected to brainwashing inside Room 23 by being forced to watch a video, strapped to a chair, while extremely loud drum-and-bass music was played. Alex, Kate, and Sawyer found him with an IV in his arm and wearing LED goggles. When he was freed, Karl was not fully conscious and had to be carried out by Sawyer. The video Karl was subjected to contained various quick cuts of images and text, as well as a reference to Jacob and short glimpses of Gerald DeGroot and Alvar Hanso. At the time, the facility that housed Room 23 was guarded by Aldo. ("Not in Portland")

In 2007, Jin was held captive in Room 23 by Charles Widmore and his team. He awoke inside the room and began flipping various switches. One switch triggered the projection of the brainwash video. Jaunted, Jin quickly stopped it. Zoe came inside and explained him that the DHARMA Initiative used the video to conduct experiments on subliminal messaging. ("The Package")

The following are descriptions taken from various times the video was shown as seen by Walt, Karl, and most recently Jin.

10 high by 10 wide octagonal matrix of alternating image squares, with 3 squares missing from each corner

"EVERYTHING CHANGES" superimposed on:

10x10 octagonal image matrix with the two central horizontal and vertical rows being two cells combined and the central four cells being combined. The images change in symmetrical patterns and include:

a sequence of close ups of doll's faces:

a statue of Buddha

close-up of a high contrast painting: a face focusing on the eyes and nose

"We are the causes of our own suffering" superimposed on

an energy-saver lightbulb curves to resemble a yin-yang symbol

close-up of gears, probably from a watch

"THINK ABOUT" and then "YOUR LIFE" in bold white letters superimposed on a black background morphing into a octagonal matrix of symmetrical image squares that include:

Connection to The Lost Experience 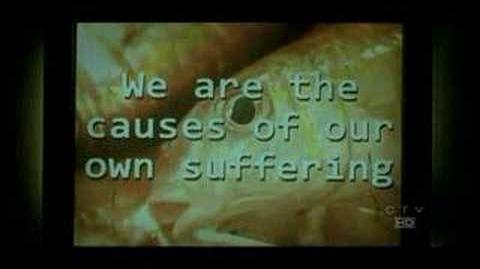 The official full-length video was released on the Season 3 DVD as an Easter egg. It is presented in widescreen.