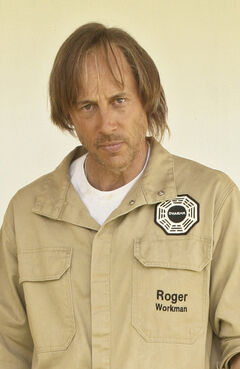 Roger Linus was the father of Benjamin Linus, whom he regularly abused, both verbally and possibly physically, and berated as a child. He was employed as a DHARMA Initiative "Workman," and he was killed by Ben during the Purge. In 2004, Hurley found his skeletal corpse in the DHARMA van.

On December 19th, 1964, Roger and his wife, Emily, went on a hike in a forest near Portland Oregon. At the time, Emily was seven-months pregnant with, presumably, their first and only child. For an unknown reason, she went into labor early into the hike. Roger delivered the baby, picked up Emily and the baby, and ran for help. They reached the side of a busy road and Roger managed to stop a couple for help. Sadly, it was too late for Emily as she died in his arms. With her dying words, she asked Roger to name the baby "Benjamin". ("The Man Behind the Curtain")

In 1973, Roger took a job with the DHARMA Initiative, a courtesy of the same couple that was present when his wife died. He and Ben, who was 8 years old at the time, came to the Island on a submarine and were enthusiastically greeted by Horace Goodspeed. When Opal assigned Roger the entry-level position of "Work Man," he expressed his dismay and stormed-out of the processing center with Ben. At first, Roger tried to coax Horace into getting him a better job, but he soon seemed to resign himself to his fate and started drinking heavily. He eventually, and irrationally, came to blame Ben for the death of his mother and Roger's failures in life. ("The Man Behind the Curtain")

In 1977, Roger was assigned to mop up the cell where Sayid Jarrah was being held captive. He mocked Sayid for letting himself be captured by DHARMA and promised that Oldham's interrogation would cut him down to size. When his son entered with another sandwich for Sayid, whom he believed was one of the Hostiles, Roger furiously slammed him against the bars, not believing his lie that the sandwich was actually for Roger himself. He yelled at Ben to leave, then left himself. After this encounter, it seems that Roger physically beat Ben due to his broken glasses, bruised eyes, and bruised face. ("He's Our You")

In the aftermath of Sayid's escape, Roger befriended Kate as the two worked to extract the DHARMA van from one of the bungalows and discussed the jobs they were given when they were recruited. As they were there he witnessed Jin arriving with an injured Ben. While Juliet and the other medical personnel worked on Ben, Roger waited anxiously outside, where he learned from Sawyer that Ben had stolen his keys and used them to free Sayid. Later, as Kate donated blood to help save Ben, Roger confessed that when Ben was born, he thought he would be "the greatest dad in the world", but he knew he was not. He said he was trying to do what he thought Ben's mother would have wanted. ("Whatever Happened, Happened")

After Ben was taken from the infirmary, Roger became furious and reacted by getting drunk. Kate approached him to reassure him that Ben would be fine because she had a good feeling about it. Roger, however, took this in a different way and became suspicious, claiming that Kate was involved in Ben's disappearance. When Roger asked Jack if Kate could be involved, Jack stated that Kate was his friend, and she would not harm Ben. However, Roger remained suspicious. ("Some Like It Hoth")

The next day, as the DHARMA Initiative was being evacuated and an emergency protocol was being established, Roger spotted Sayid and Jack on the Barracks lawn. Sayid tried to tell Roger that he was carrying a dangerous thermonuclear device, but without listening Roger quickly shot him in the stomach. Roger was forced to take cover when Jack began firing his weapon in retaliation. ("The Incident, Part 1") Sayid would later die (albeit temporarily) because of this injury. ("LA X, Part 1")

Roger remained a workman for 10 more years, until his death on December 19 in the year of The Purge. On that day, Ben, who by then was also a workman, accompanied his father on a delivery errand to the stations around the Island. Since it was Ben's birthday, the two stopped on the Mesa to drink beer and take-in the view. Unbeknownst to Roger, Ben had allied himself with the Hostiles, and as part of the Purge, Ben murdered his father with toxic gas. Ben did not bother to dispose of the body, instead opting to leave it to decompose ingloriously in the DHARMA van. ("The Man Behind the Curtain")

Over sixteen years later, Vincent brought Roger's severed arm to Hurley. This led to Hurley's discovery of the DHARMA van, the keys of which were clutched by the arm. During the process of pulling Roger's corpse from the wreckage, the corpse's head also fell off the body. Sawyer dubbed Roger's remains "Skeletor" while Hurley believed his name was "Roger Workman" based on his outfit. ("Tricia Tanaka Is Dead") It's likely the survivors buried Roger's remains, rather than leaving them out in the jungle.

Roger Linus joined the DHARMA Initiative and traveled to the Island alongside Ben, though they left at some point prior to the Island's destruction. Decades later, Roger was severely sick, and depended on oxygen tanks to survive. He lived in California with Ben, who was a high school teacher. The two had an amicable relationship, though Roger said he would've liked to stay on the Island, believing Ben would've had a better life there. ("Dr. Linus")

Retrieved from "https://lostpedia.fandom.com/wiki/Roger_Linus?oldid=1115066"
Community content is available under CC BY-NC-ND unless otherwise noted.