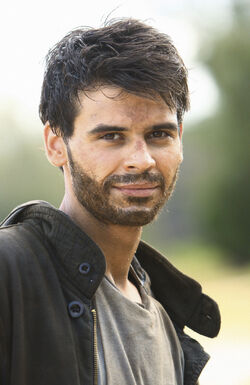 Robert was a member of Danielle Rousseau's science expedition that became shipwrecked on the Island. Robert was Alex's biological father and was Danielle's lover.

When the science expedition's boat crashed on the Island, Robert and his fellow expedition members survived by floating on an octagonal life raft near the coast of the Island, withstanding torrential rain. They soon discovered an unconscious Jin, a victim of the Kahana explosion and time travel, floating on a piece of flotsam, and rescued him, bringing him ashore. While sorting through the wreckage of their boat, Robert, Danielle, and Montand questioned Jin. ("The Little Prince")

Robert and the other members of the team were being led by Jin through the jungle when Nadine went missing, being found moments later mangled by the Monster. The creature attacked Montand and tried to pull him down a hole beneath an unknown ruin, and Robert, Brennan, Lacombe, and Jin tried to hold on to him. The Monster managed to pull Montand in, leaving behind only his arm. Robert, Brennan, and Lacombe were about to enter the hole to search for Montand, who they heard calling for help, when Jin was sent away to a later time. ("This Place Is Death")

According to Danielle, he came down with the Sickness. This was later shown to be what Rousseau believed was a "change" caused by the Monster. Robert tried to convince Rousseau that it wasn't a "monster", but a security system guarding the Temple. Rousseau held him at gunpoint until he convinced her that he wouldn't hurt her. When Rousseau lowered her rifle, Robert raised his and tried to shoot her, only to find she had removed the firing pin from his rifle in secret, at which point she shot him in the head, killing him. ("Solitary") ("This Place Is Death")

Robert once gave Danielle a music box for their anniversary, which she years later still cherished. ("Solitary")

Robert neither appears nor is mentioned directly in the flash sideways world. However, when Ben asks Danielle where Alex's father is, she replies that he died when Alex was two. ("What They Died For") It can be presumed that he is still Alex's father in this realm, although it is unknown what his cause of death was.

Retrieved from "https://lostpedia.fandom.com/wiki/Robert?oldid=1115406"
Community content is available under CC BY-NC-ND unless otherwise noted.