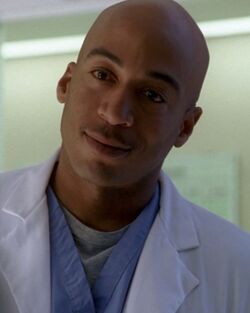 Dr. Robert Hamill became the new chief of surgery at St. Sebastian Hospital following Jack's return to work after the rescue of the Oceanic Six. He tried to convince Jack to seek help after observing Jack's drunk behavior.

After Jack saved a woman from a car accident, Dr. Hamill refused Jack's request to perform surgery on her. While he was familiar with (and impressed by) Jack's accomplishments, he was also visibly concerned by Jack's increasingly depressed and unstable condition. After catching Jack raiding a medicine cabinet looking for oxycodone, he confronted Jack. Jack attempted to pass off the act of looking for medicine as an examination of the results of Mrs. Arlen's surgery. Dr. Hamill noted that he had already left three voicemails on Jack's phone. He then pointed out that the car accident occurred when the driver was distracted by the sight of Jack standing on the railing of a bridge. Jack became angry and yelled at Dr. Hamill, telling him not to pity him. ("Through the Looking Glass")

Retrieved from "https://lostpedia.fandom.com/wiki/Rob_Hamill?oldid=1116170"
Community content is available under CC BY-NC-ND unless otherwise noted.