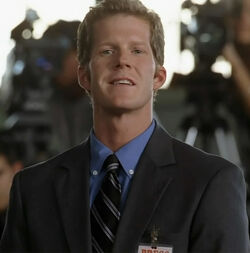 Reporter #1 was the first reporter allowed to ask questions at the press conference arranged for the Oceanic Six. His initial questions were aimed towards Jack. He asked him what it was like when the plane hit the ocean, how he survived, if they swam to the island, and who the other three initial survivors were.

He also questioned Kate about how it felt giving birth on the island. He then turned his attention to the timeline of her pregnancy, asking for clarification that she would have been six months pregnant at the time of her arrest; however, Karen Decker quickly intervened, stating that Kate's legal issues were off the table. ("There's No Place Like Home, Part 1")

Retrieved from "https://lostpedia.fandom.com/wiki/Reporter_No._1?oldid=1095131"
Community content is available under CC BY-NC-ND unless otherwise noted.