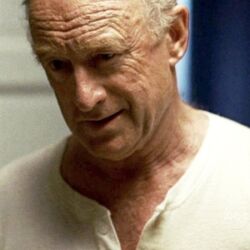 Ray Mullen was a farmer in Australia for whom Kate worked prior to the crash of Oceanic Flight 815. His farm is 100 km from Melbourne.

Ray found a fugitive Kate sleeping in his sheep pen one morning, and gave her a job doing chores around his farm, since his wife had died eight months previously. Kate worked at Ray's farm for nearly three months until Ray spotted her mugshot at the post office and decided to turn her in to United States Marshal Edward Mars for a $23,000 reward. During the confrontation with Mars, Kate caused Ray's truck to overturn. She then saved him by pulling him out from the burning wreckage, which allowed Mars to capture her. Later, on the Island, Kate told the marshal that she wanted to make sure the reward went to Ray, since he had "a hell of a mortgage". ("Tabula Rasa")

During The Lost Experience, a "Ray Mullen letter" circulated on the Internet, making false claims; this was a hoax and not a part of The Lost Experience. The fake logo attached to the letter can now be seen at Fan-made DHARMA logos.

Retrieved from "https://lostpedia.fandom.com/wiki/Ray_Mullen?oldid=1051467"
Community content is available under CC BY-NC-ND unless otherwise noted.