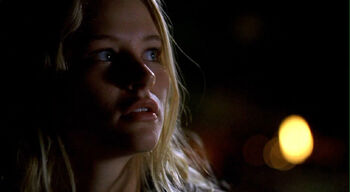 "Raised by Another" is the tenth episode of Season 1 of Lost. After experiencing terrifying nightmares two nights in a row, Claire begins to think that someone is trying to hurt her baby. In response, Hurley decides to start a census of all of the survivors. Flashbacks in this episode focus on Claire's struggle with accepting the fact that she has to raise her unborn child herself.

Claire leaves the bathroom and her boyfriend, Thomas, asks her what the result is. She has just taken a pregnancy test and the two panic about the result. Time elapses, and Claire realizes that she is indeed with child. The thought petrifies her, but Thomas reassures her. He says that he loves her, and that a baby might be “the best thing ever.” ♪

Later, Claire discusses the situation with her friend Rachel, telling Rachel how excited she was. They arrive at the home of a psychic, Richard Malkin, whom Rachel has convinced her friend to see. Inside, the psychic reads Claire’s palm and immediately congratulates her on her pregnancy. He remarks that things are a bit blurry and asks if she's sure she wants to go on and she says yes. His face then tightens, as though he has seen something frightening. He swiftly returns Claire’s money and refuses to continue the reading, ushering the two women out.

Back at her apartment, Claire is busy childproofing and redecorating the place. However, Thomas quickly causes her mood to change, saying that he cannot do this anymore. The reality of having a child has given Thomas cold feet, and he mentions Claire’s “daddy abandonment issues” in an attempt to lay the blame on her for his pulling away in the relationship. The two begin to argue and Thomas continues with his cold comments, saying that Claire was supposed to be taking the contraception pill and insinuating that she intentionally got pregnant.

The psychic opens his door to find Claire there, requesting a second reading. She jokes as he counts her cash, and the psychic notes that Claire has been dumped. He asks if she wishes to continue after what he saw last time, and she agrees. He says it is crucial that Claire raises the child herself, and her goodness must influence her baby’s development. Claire says she will put the baby up for adoption unless Thomas returns, but Malkin insists that she must listen. As he continues to shout, Claire runs away in fear.

At night, Claire wakes up as her phone rings. On the other end is Malkin, who has apparently been calling Claire for months now. He again insists she keeps the baby, and he says he has a plan. Claire, however, does not listen and hangs up on him.

Now at a solicitor's office, Claire is finalizing details of adoption to Arlene and Joseph Stewart. They agree that Claire will have no legitimate rights to the child, and that she will be paid upon the child’s birth. Before she signs the document, she requests that the Stewarts sing the song “Catch a Falling Star” to the baby, as her father sang it to her as a child. She tries to sign, but the pen is not working. The lawyer passes her another, but again ink does not come out. As a third is passed to her, Claire begins to have second thoughts, and she runs away. ♪

Malkin once more opens his door to find Claire, who tells him she is ready to listen to his plan. Inside, Claire is told that a couple in Los Angeles are “good people,” and that they will take good care of the child. He gives her tickets for Oceanic Flight 815, but Claire is put off by the fact that the flight is only a day away. Malkin firmly says it cannot be any other flight and the couple is waiting to meet her in America.

Claire wakes up in the night. She hears a baby's cry. Claire sits up with a confused and concerned expression on her face; she looks down and feels her stomach, noticing that she is not pregnant. She hears the cry again and starts off into the jungle in a daze, looking for the source of the crying. Claire sees a light in the jungle and walks toward it, where she encounters Locke sitting at the table at which she received her psychic reading; the psychic's electric lamp is also present. As she approaches, Locke is drawing tarot cards from a deck one by one as he stares down at the table. The first card makes the sound of a metal against metal, like a knife being unsheathed. They exchange a few brief words:

LOCKE: You know what's happening.
CLAIRE: But I don't understand. Why --?
LOCKE: He was your responsibility but you gave him away, Claire. Everyone pays the price now.

As Locke finishes saying this, he looks up at her with a creepy expression on his face; he has one black eye and one white eye. Claire hears a baby's cry and runs into the jungle. She finds a crib with a plane mobile and pulls the blankets back, finding a thick dark pool of blood. She wakes up from this nightmare and she begins screaming. Claire stands in the caves screaming hysterically; Charlie grabs her to stop her screams and fighting as she wakes up. She eventually calms down; Charlie notices her bloody hands and asks what happened.

In the morning, Jack sees to her hands, commenting that she must have had “one hell of a nightmare” to have dug her nails so deeply into her palms. Claire implies that perhaps it was not a nightmare, but Jack shrugs the event off as sleepwalking and stress.

At the beach, Jack finds Kate watching the ocean. The two begin to flirt as Kate explains that she is sinking in the sand due to the effect of the waves. She remarks that Sayid has been gone for almost a week, but Jack says, "Something tells me he'll be okay." Then, with a concerned look on his face, he tells Kate that Claire will have the baby soon.

Charlie and Claire sit in the jungle having a quiet moment with a cup of tea. They talk about her nightmare, and Charlie says that if she ever needs anything, he is there for her. She seems touched, but does not reply, and Charlie interprets that as a hint that he should go.

Once again at night, Claire sees a man covering her mouth and stabbing her stomach with a needle. She wakes, screaming loudly just like the night before. She says that someone attacked her, and Charlie and Hurley go to scout the area. Jack and Michael try to comfort her, but Claire is adamant that what she saw was real and that someone truly was trying to hurt her baby. The event leads Hurley to realize that none of the survivors has any idea of who their fellow survivors on the Island really are. He wants to start a census of who everyone is, where they live (in the caves or on the beach), and other information about them. Meanwhile, Charlie reassures Claire that he will watch over her all night.

The next day, Hurley asks Locke questions about his background and his reason for traveling to Australia. John answers the questions, saying he came to Sydney “looking for something” and he has lived most of his life in Tustin, California. Further down the coast, Jack tells Charlie and Kate that he thinks Claire is merely dreaming. Charlie cannot believe he is suggesting that Claire is lying, but Jack attributes it to the stress and emotional imbalance of her pregnancy on the Island.

In the jungle, Hurley questions Ethan Rom. Ethan answers the questions, saying he is from Ontario. He asks what the census is for, and Hurley says he simply "thought it would be a good idea." At the caves, Jack tries to tactfully tell Claire he thinks she should take some sedatives. Claire realizes Jack thinks she is making everything up. Packing her things, she decides to go back to the beach, which she thinks is safer than the caves. Charlie catches up with her, and escorts her for her protection, despite her telling him to leave her alone. ♪

At the beach, Hurley has begun questioning Shannon, who is preparing to move to the caves. She answers his questions: her name is Shannon Rutherford, she is 20, and her address is "Craphole Island". She and Boone ask Hurley why he is making the list, and he tells them what may have happened to Claire. Shannon suddenly drops her bags, telling Boone they are now definitely not moving to “the rape caves." Boone shrugs off Shannon’s words and tells Hurley about the flight manifest. He says the names of the dead have been crossed off, so it should be a full roster of who is left on the Island. Hurley asks who has it, and Boone replies, “Who do you think?” Immediately realizing who he means, Hurley heads to Sawyer's tent. Rather than demand the manifest, Hurley uses the calm approach of analyzing the con man, pointing out he could use the points amongst the Islanders. The tactic is successful; Sawyer gives Hurley the manifest.

As Claire and Charlie continue heading to the beach, Claire begins to feel contractions. Charlie offers to deliver the baby himself, but in his nervousness he reveals that he is a recovering drug addict. Claire flatly tells him to get Jack at once. Charlie finds Ethan and tells him to find Jack immediately. Charlie returns to Claire and helps her calm down. She tells him about the psychic she once visited, and while she thinks he was wrong, Charlie says perhaps he knew of their fate. Claire becomes convinced Malkin put her on the flight knowing what would happen. She starts to feel better, and Charlie remembers that Jack told him about stress causing a false labor. The relationship between the two is now completely mended, and they decide to head back to the caves. ♪

There, Jack and Kate are shocked to see Sayid stumble in. Sayid is severely dehydrated and delirious, speaking of the French woman. He ominously adds that “we are not alone” before fainting. Before they can properly take care of him, Hurley shows up to talk about his list. He has cross-referenced all the names he collected with those on the flight manifest, and found that one of them was not on the latter. That person was not on the plane.

As Charlie and Claire begin their trek back, they are greeted by Ethan. Beginning to feel uncomfortable, they ask where Jack is. Ethan simply stares at Claire, and a frightened look forms on her face.

Claire's theme is introduced in the first flashback, as Claire and Thomas discuss her pregnancy. It also shows up later in scenes involving her and Charlie. None of these statements can be heard on the season 1 soundtrack, but a different statement of the theme can be heard on the track "We're Friends". The episode also introduces a motif that plays during scenes involving paranormal phenomena.

For fan theories about these unanswered questions, see: Raised by Another/Theories

Retrieved from "https://lostpedia.fandom.com/wiki/Raised_by_Another?oldid=1093502"
Community content is available under CC BY-NC-ND unless otherwise noted.