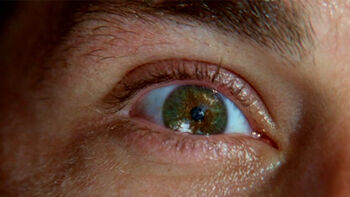 "Pilot, Part 1" is the first of the two-part pilot episode of Lost. It was originally broadcast on September 22, 2004, and "Pilot, Part 2" aired the following week. The two parts re-aired together on October 2, 2004. Jack Shephard, a doctor from Los Angeles, finds himself one of forty-eight survivors of a plane crash on a mysterious island. With the help of other survivors, he begins to treat the injured and attempts to find the cockpit of the plane in the hope of contacting civilization.

The episode establishes the show's use of flashbacks to show characters' lives before arriving on the Island. The one flashback in this episode depicts Jack's view of events on the plane just prior to the crash.

Jack Shephard, sitting in seat 23A on board Oceanic Flight 815, pensively looks out the cabin window to his left. A friendly flight attendant, Cindy Chandler, passes and asks him if he enjoyed his drink. His lukewarm response that "it's not a very strong drink" leads her to give him two more sample bottles of vodka. After consuming one of the bottles, Jack rises and stands in the aisle, where a hurried Charlie Pace passes him, pursued by Chandler and another flight attendant.

Rose Nadler, sitting next to Jack in seat 23D, comments about the incident. She reacts to some light turbulence and Jack attempts to allay her fear. She says that her temporarily absent husband always reminds her that "Planes want to be in the air." Jack says her husband sounds like a smart man; Rose says she'll tell him that when he returns from the bathroom. The plane begins to shake more violently before making a sharp, uncontrolled descent. Some passengers are thrown about; one hits the cabin roof. The cabin loses pressure as the plane rapidly descends; oxygen masks fall from the ceiling. Jack secures his mask and looks out the window, this time at the approaching ocean.

Jack wakes, disoriented, flat on his back in a dense bamboo grove. A golden Labrador Retriever, Vincent, looks at him and runs past him. Slowly, Jack struggles to his feet. He leans against a tall piece of bamboo and finds a sample bottle of vodka in his jacket pocket. Jack runs haphazardly through the grove, passing a white tennis shoe hanging from a tree. ♪

Jack emerges at a pristine beach but finds to his left the chaos of the wrecked mid-section of Oceanic Flight 815. He stumbles toward the smoking crash site where survivors move about in disarray. Charlie Pace, dazed, stands dangerously close to a still-running jet engine. Jin-Soo Kwon, oblivious to his fellow passengers, cries out in Korean for his wife and Michael Dawson shouts for his son, Walt, as he runs through the wreckage. Nearby, Shannon Rutherford stands screaming hysterically beneath the plane's precariously teetering wing. With the help of John Locke and two other men, Jack pulls a passenger with a crushed leg from underneath one of the plane's detached landing wheels and ties a tourniquet above the injury. Jack sees an 8-month pregnant woman crying for help and orders Locke to keep others away from the engine. He runs to the girl and asks how far apart her contractions are. He notices a young man incorrectly performing CPR on a woman. Meanwhile, Gary Troup, while crossing the path of the still-running engine, is sucked in and the engine explodes violently.

After shielding Claire from the explosion, Jack tells her to remain absolutely still. He directs Hugo "Hurley" Reyes to take her away from the fumes of the burning wreckage and to call him if her situation worsens. Hugo asks his name and Jack calls his first name back. Jack goes back to Boone and tells him that he is doing mouth-to-mouth incorrectly. The well-intentioned but unqualified Boone goes to find a pen thinking it may help. The woman, Rose, eventually breathes again after Jack's continued attempts to resuscitate her. Jack looks up and sees Hugo and Claire sitting under the ominously creaking plane wing. He dashes to them and the three escape just as the wing collapses and explodes. A piece of the plane's engine narrowly misses Charlie as he wanders aimlessly. ♪

Jack wanders through the wreckage, stops at what remains of the fuselage, and peers in. Boone arrives with a handful of pens, saying that he didn't know which one would work best. Jack replies that they are all good as Boone solemnly looks into the wreckage. ♪

Jack finds a sewing kit in a suitcase and runs to a secluded spot away from the wreckage to treat a large gash on his lower back. He sees Kate Austen walking out of the jungle and asks her to stitch his wound as it is out of his reach. She reluctantly agrees. She rinses her hands with Jack's vodka while he washes the wound. He chooses "standard black" thread from the kit.

Terrified, Kate is calmed by Jack's story of his first solo surgical procedure on a girl, when he accidentally ripped her dural sac after a 14 hour operation. He says he conquered his fear by "letting the fear in," but only for five seconds which he counted away. Kate says that she would have run for the door, but Jack points out that she is not running now.

On the beach, it is twilight. Sawyer smokes a cigarette grimly as he surveys the wreckage; Claire stands looking to sea; Locke sits on the beach. Hurley salvages some meals from the plane's galley. Sayid enlists Charlie to keep the fire he has built alight and big, otherwise no one will see it. Rose tearfully kisses her wedding ring.

Night. Charlie has written "F A T E" on a bandage on his left hand, one letter on each finger. Sayid says that he would have expected them to have been rescued by now. Shannon petulantly refuses a chocolate Apollo bar offered to her by Boone while she paints her toenails, saying she will eat on the "rescue boat." ♪ Hurley distributes the meals he found earlier, giving two to Claire. Michael cares for his son. Jin tells Sun that she must stay with him at all times and not care about the other survivors.

Jack tends to an unconscious Edward Mars, who is badly injured by shrapnel embedded in his abdomen. Kate asks Jack if he believes the man will live and tells him that she was sitting next to the man during the flight. They discuss the crash and where the missing cockpit and tail might be. Jack thinks there might be a transceiver in the cockpit they could use to send a signal.

Beyond the light of their fire, the peacefulness is interrupted by loud and terrifying mechanical-sounding noises from the jungle, accompanied by the crashing of trees. The survivors gather together fearfully and look toward the noises.

The next day, as some of the survivors discuss the strange jungle noises of the night before, Kate and Jack prepare to search for the cockpit and its transceiver. Kate takes walking shoes from a dead body and looks up to see Locke watching her. He smiles, revealing an orange peel obscuring his teeth. ♪ Jack leaves Boone in charge of the wounded, including Edward Mars. Charlie pushes himself into the search group, and they set off to follow Kate's descriptions of the location of smoke she saw the previous day. ♪ Kate tells Charlie he looks familiar; he reveals that he is the bassist in the band Drive Shaft. Vincent watches the trio from the bushes.

As evening approaches, a tropical rainstorm drenches the survivors. Only Locke remains uncovered as he welcomes the rain with open arms. The terrifying noises and movement in the jungle are observed again by Claire and Rose.

The trio find the nose section of the plane, which is suspended at a steep angle in trees. ♪ Led by Jack, they climb into the nose and scale the slanted floor, where Jack pries open the cockpit door and a body falls through the door. Inside, they find the pilot of Oceanic Flight 815, unconscious and still in his seat. He suddenly awakens and coughs. The pilot tells Jack and Kate that the plane had lost radio contact before the crash and changed course towards Fiji. They were, in his reckoning, 1000 miles off course and "they are looking for us in the wrong place." The pilot locates the plane's transceiver, but can't get it to work. Jack and Kate notice that Charlie is missing. As Kate calls for him, he guiltily emerges from the bathroom.

Loud noises and the mechanical thrashing heard by the survivors on the beach fill the air. The pilot attempts to investigate by cautiously peering out of a broken cockpit window. To the horror of the search party, the pilot is seized by something unseen and pulled through the window. A large splatter of blood splashes on the cockpit window as he disappears. Jack grabs the transceiver as he and Kate exit the cockpit in terror. As the three run from the Monster, Charlie trips. Jack runs back to him to free his leg, and becomes separated from the group. Kate continues running but stops and draws herself under the trailing roots of a banyan tree. She calms herself by counting to five, as she and Jack had discussed earlier. ♪

Charlie runs into Kate and the two begin searching for Jack. The rain stops. Kate finds the pilot's badge in the mud beneath a tree, and she and Charlie look up and spot his bloodied body suspended in the treetops, mangled. Jack steps out of hiding, saying that he dodged the Monster. Looking up, Charlie wonders what could have possibly done that to the pilot.

Michael Giacchino's score for this episode relies more on synthesized instruments than later episodes would, but the instrumentation is otherwise very similar. The episode also establishes the basic contrast between quiet, consonant passages and loud, dissonant ones.

The episode opens, in quick succession, with a crash motif, a "waking motif" and the show's main mystery theme, all of which appear on the season one soundtrack in the track "The Eyeland". A 14-bar percussion cue during the chaotic scene at the crash site appears on the soundtack as "World's Worst Beach Party" and was appropriated for use in the end credits theme music for the show. After the action settles down, Giacchino introduces the gentle theme for the survivors as "Credit Where Credit is Due", which has become a much-used theme throughout the series.

The other major theme introduced in the episode is the show's first "traveling theme," a quiet and repetitive motif for scenes involving treks across the Island. A different statement of this latter theme can be heard on the Season 3 soundtrack as "Juliette is Lost". Other motifs include an action motif, which appears as the track "Run Like, Um... Hell?", a motif for the camp, a grim motif as Kate collect shoes from a corpse and a suspense motif that plays during the cockpit scene. Another suspense motif plays soon before the episode closes.

Retrieved from "https://lostpedia.fandom.com/wiki/Pilot,_Part_1?oldid=1074361"
Community content is available under CC BY-NC-ND unless otherwise noted.