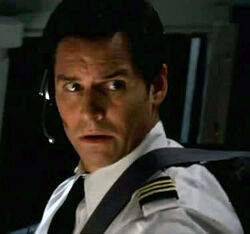 Peter Ross of Ajira Flight 316 was killed when he was impaled by a tree branch during an emergency landing of the plane on Hydra Island. While he was at the cockpit with the pilot, he told him that he recognized that the big guy they've got from LA was one of the Oceanic Six. When the plane hit heavy turbulence, he switched off the plane's autopilot. ("Namaste")

Retrieved from "https://lostpedia.fandom.com/wiki/Peter_Ross?oldid=1106051"
Community content is available under CC BY-NC-ND unless otherwise noted.