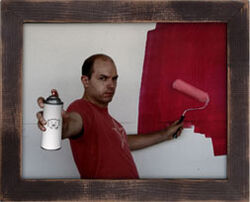 Paul Scheer is a real-life comedian and the protagonist of the ARG Damon, Carlton and a Polar Bear. He has also appeared in the ongoing Lost Slapdown. On February 27, 2010, Scheer hosted the Lost panel for PaleyFest 2010 at the Paley Center for Media.

Damon, Carlton and a Polar Bear

Scheer appeared during the 2009 Lost Comic-Con panel, waiting in line as part of the Q&A segment. Scheer presented his velvet painting, claiming he spent the last 6 months working on it. After naming his personal website, named after his painting, Scheer handed the painting to Damon Lindelof.

Scheer sent a printed reproduction of his black velvet painting to two well-known bloggers, DocArzt and Peter Sciretta from SlashFilm, with an attached note.

Soon after, those two bloggers received a letter from Ronie Midfew Arts, alerting them that Scheer was not authorized to create Lost-related artworks.

Scheer's website, which is named after his infamous painting, functions as a blog, featuring Lost news, theories and lately, his growing resistance to Ronie Midfew's company which attempts to stop his painting process. Scheer announced that he will release his next Lost-related painting on August 15th.

On Thursday, August 6th, Scheer made his way to the ABC offices, after an ABC intern going by the name Mr. Klugh informed him of his painting being trashed; seemingly not by Damon or Carlton, but rather by Ronie Midfew Art. Arriving at the lot, Scheer failed to find the offices or Damon or Carlton (though Carlton bumped into him and Damon walked right past him).

Scheer, though, did find the shredded front page of the sixth season's premiere, which he taped and published on his website, revealing the title of the episode. Scheer also found the set design for the Temple, and a rose which the cameraman broke. Scheer published the video on Monday, August 10th.

Paul's letter to the media outlets.
Add a photo to this gallery

Scheer was invited by Midfew for a meeting, during which the two of them, along with Damon and Carlton, agreed to collaborate in order to create an experience for the Lost fans prior to season 6. Scheer's website now presents 16 frames, with each painting being revealed after a series of clues is presented.

Retrieved from "https://lostpedia.fandom.com/wiki/Paul_Scheer?oldid=772776"
Community content is available under CC BY-NC-ND unless otherwise noted.