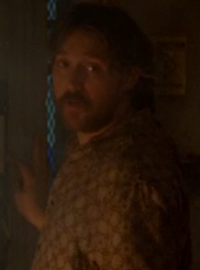 Paul was a technician in Charles Widmore's science team. He activated the switch that caused the death of Simmons. ("Happily Ever After") Paul was present when Sawyer was captured by Zoe and Seamus. ("Recon"). Later, when Sawyer and his friends, returning to Hydra island with the "Elizabeth", were captured again and brought to the cages, he was there as well. When Widmore asked if the fence was live yet, Paul told him it would take about another hour. Not much later he had to tell Seamus that somebody had killed the power. Then the Monster attacked. It is unknown if Paul survived the attack, but died in the attack presumably. ("The Candidate")

Retrieved from "https://lostpedia.fandom.com/wiki/Paul_(Widmore%27s_team)?oldid=1114111"
Community content is available under CC BY-NC-ND unless otherwise noted.