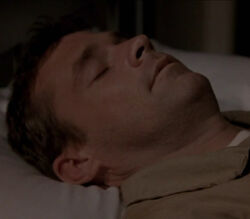 Paul was a member of the DHARMA Initiative who worked as head of security. He was killed by a pair of Others while on a picnic with his wife, Amy. The Others were then killed by Juliet and Sawyer. Amy begged that Paul be brought back to the Barracks and Jin volunteered to carry him. When Richard Alpert confronted Horace about the broken "truce", they came to an agreement that Paul's body be handed over to Richard and the Hostiles. Before letting Paul's corpse be taken away, Amy took Paul's necklace and kept it. ("LaFleur")

Retrieved from "https://lostpedia.fandom.com/wiki/Paul_(DHARMA_Initiative)?oldid=1115973"
Community content is available under CC BY-NC-ND unless otherwise noted.