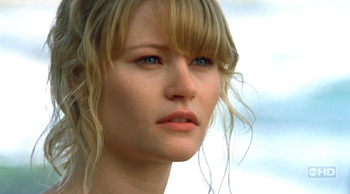 "Par Avion" is the twelfth episode of Season 3 and the sixty-first produced hour of the series as a whole. It was originally broadcast on March 14, 2007. After noticing some migratory birds, Claire hatches an impressive plan to get the survivors of Flight 815 rescued. Meanwhile, Sayid, Kate, Locke, and Danielle continue their trek to the Barracks with Mikhail in tow.

A left eye with heavy black eye-liner slowly opens; it is Claire. She awakens slowly to realize that she is sitting in her automobile immediately after a severe car accident. She is cut, her airbag is deployed and deflated, and her mother has been thrown through the broken windscreen onto the pavement. When her door does not work Claire crawls through the broken windscreen to reach her mother, who remains motionless.

In the hospital, Claire's forehead wound is stitched and a policeman, Officer Barnes, enters and questions her about the accident. She becomes very defensive when she believes he is implying the fault was hers, or that her mother may die.

Returning to the hospital after briefly going home for a shower, Claire finds her aunt Lindsey in her mother's room. They have a brief confrontation where Claire is accused of not caring about her mother, when a doctor enters the room. He informs them that the surgery has stabilized her mother's condition but that she may be in a permanent coma. When Lindsey says that they can't afford such long-term medical care, the doctor reveals that the entire medical bill has been covered by an anonymous benefactor.

Claire later returns to visit her mother and finds an American doctor, Christian Shephard, in the room, lightly touching her mother's forearm. When Lindsey enters the room, she immediately demands to know why he is there and begins to argue heatedly with him. Claire is confused as to who he is and how Lindsey knows him. Eventually the man reveals that he is Claire's father, whom she had been told was dead.

Some time later, Claire is working in a tattoo and piercing parlor when Christian enters, and asks her to join him for coffee before he leaves Australia. Although she is angry with him, she agrees.

At the coffee shop, Christian explains that he had a fling with her mother that resulted in her birth. He also says that he had visited occasionally when she was younger, but that the fact that he had another family in the United States eventually made her mother and Lindsey too resentful for his visits to continue. Christian suggests that Claire should consider taking steps which are not illegal; and would allow her mother's suffering to end. Claire can not agree, and tries to leave without even wanting to know her father's name. Christian cautions her not to allow her guilt for her mother's condition to cloud her decision.

In 2004, Claire's mother is still in hospital in a coma. Claire visits her, a visit which is routine. Claire is now a blonde and is obviously pregnant. She turns the television on to a nature program showing a scene of migratory birds flying in formation. She explains to her unconscious mother that she is pregnant and is about to give the baby away for adoption. She also apologizes to her mother, explaining that she now understands how hard it was for her mother to raise her, especially because she was such a difficult daughter. She becomes overwhelmed with guilt and, as she begins to sob. She apologizes for arguing with her mother during the fateful car ride, where she told her that she hated her and wished she was dead, and describes the guilt she feels for the accident. ♪♪

Claire opens her right eye, awakening in her tent to a plate of fruit beside her with a message attached to it that reads, "G-Day!" Charlie arrives at her tent, carrying Aaron, and tells her about a picnic he has planned on the beach, and that he has arranged for Sun and Jin to take care of Aaron while they dine. Before Charlie and Claire can settle into their picnic, Desmond comes out of the jungle asking for Charlie to come hunting with him saying his time would be better spent hunting. Charlie is reluctant but Desmond persists, he has an ulterior motive. Just then Claire notices gulls flying in the air and announces that she has realized a possible way of getting off the Island.

Claire explains to Charlie that the gulls are migrating south, and that scientists have tagged them to see where they land. She devises a plan to capture a gull and tie a rescue note to its leg in hopes that a scientist will find and read it and enlists Sun and Jin to help. She attempts to persuade Charlie as well but he is uncharacteristically pessimistic, refusing to help. While Jin prepares a net, Claire and Sun chop up fish to use as bait. As they do so, Sun muses that this is precisely what her mother feared - her growing up to do mundane fishing work. Claire and Sun briefly discuss their parents' expectations for them before the net is completed and they begin the gull catching. ♪ Eventually a lone bird is attracted into the trap, but it is startled and flies off when Desmond fires a hunting rifle. He claims to be boar hunting. Frustrated, Claire demands that Charlie tell her why he and Desmond do not want her to catch a bird. Charlie spins a story about false hope and sends Charlie away saying that she does not want liars raising Aaron.

Distraught, Claire decides to find out what is going on for herself. She surreptitiously follows Desmond to a rocky area off the coastline where he effortlessly plucks a gull from a seaweed mound on the rocks. Claire confronts Desmond, noting he went straight to the hidden bird so he must have known it would be there. After an initial denial, Desmond explains his visions of the future: he gestures to a rock and claims that it is the location where Charlie, attempting to get a bird for Claire, would have slipped and fallen into the ocean, then died in the treacherous currents under the rocky shoreline.

Returning to camp, Claire is no longer angry with Charlie; she writes a rescue note and Charlie ties it to the gull's leg. The note informs the reader of the survivors' current circumstances, and encourages whoever finds it to never give up hope on finding them. Claire releases the bird while Charlie solemnly stands beside her. As the bird flies away from the pair, Claire tells Charlie that Desmond told her everything about his visions of Charlie's death. She promises that they can face his supposedly doomed fate together, and that she has not given up hope on him. ♪♪

On the way to the Barracks

Sayid, Locke, Kate, Rousseau, and Mikhail are resting momentarily while Sayid and Locke begin to argue about the relative merits of following the electrical conduit map found in the Flame Station, versus following Eko's stick. By a stream, when Kate is alone with Rousseau, Kate asks her why she is not interested in as details about her daughter. Rousseau explains that her daughter will not recognize her, will not know of her years of efforts to find her, and quite possibly, Rousseau will not like what her daughter has become. ♪

Later in their journey, when Kate asks Mikhail how he arrived on the Island, he recalls that he was approached by a man when he was 24 and he arrived on a submarine.

He explains that the submarine can freely leave the Island, but since the recent deactivation of the underwater beacon after the electromagnetic pulse, it would not be able to return to the Island if it left. When Kate says that she can't understand why they would remain on the Island willingly, Mikhail replies that they simply are not capable of understanding. Upon further questioning, he says that only those on the list are able to understand their reasons, but that Kate, Locke, and Sayid are flawed, and therefore not on this list. He also explains that the list was made by the same "magnificent man" who brought all of his people to the Island. Kate laughs thinking he is talking about Ben but Mikhail explains that Ben is not that man. He also lists specific reasons for why they aren't on the list: Kate is flawed, Locke is angry, and Sayid is "weak and afraid."

When Sayid indignantly laughs that the Others are not really omniscient, Mikhail immediately begins addressing them all by their full names. He also sarcastically begins to say that everyone is a stranger to him, save Locke, but that he must be mistaken about Locke because the John Locke he was aware of was "para--". He is cut off by Rousseau, who beckons for the group to examine what she has discovered, while he and Locke share a grim knowing look.

Rousseau has discovered a series of metallic posts with knobs on either side of the top, directly across their intended path to the Barracks. When asked what its purpose is, Mikhail responds that it once was supposed to guard the barracks, but like everything else it is now broken. He also claims that the system entirely encircles the Barracks, so that going around it is not an option, and tells Sayid to confirm this on his map. Locke deliberately puts down his pack and forcefully pushes Mikhail forward into the line of the security fence between two of the poles.

An intense buzzing sounds, and Mikhail has time enough to reply "thank you," before he begins foaming at the mouth, then is thrown backward, blood gushing out of his nose and ears, apparently dead. ♪

Sayid angrily questions Locke's motives for accompanying them. ♪ Kate and Sayid then discover C4 in Locke's backpack, showing that he may have been intentionally careless in destroying The Flame. Kate suggests going over the pylons and the four devise a ramp made of a fallen tree to climb over the deadly sonar fence. ♪ Kate goes safely over first, and Locke follows. ♪♪

They soon arrive at the outskirts of the barracks, which is revealed to be the same location as depicted in the opening scene of "A Tale of Two Cities": a more modern, suburb-like area, complete with inviting houses, sidewalks, decorative landscaping, and recreational utilities. As they continue hiding in the surrounding foliage, they suddenly see Jack racing toward their hiding place. Kate utters his name as she begins to move toward him, but Sayid holds her back long enough to see that Jack is enjoying a game of football with Tom. Jack spikes the football to the ground, happily simulating a touchdown. ♪♪

The Season 3 soundtrack includes the cue "Claire-a Culpa" from this episode.

Retrieved from "https://lostpedia.fandom.com/wiki/Par_Avion?oldid=1116931"
Community content is available under CC BY-NC-ND unless otherwise noted.