The usual targets are: 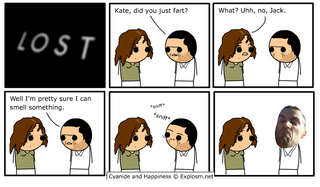 He also references the Monster, calling it a "Smokey Dragon", and wonders why no one ever thinks about it when they go into the woods.

Fire in the Attic (music group)

In The Motherhood (TV)

King of the Hill (TV)

The League of Super Evil (TV)

My Wife and Kids (TV)

Notes from the Underbelly (TV)

Order of the Stick, The (comic)

Simpsons, The (TV & and video game)

That Mitchell And Webb Look (TV)

Under the Dome (Book)

Will and Grace (TV)

World of Warcraft - Wrath of the Lich King (video game)

"like the recap at the start of an episode of Lost!"

Retrieved from "https://lostpedia.fandom.com/wiki/Outside_references_to_Lost?oldid=733415"
Community content is available under CC BY-NC-ND unless otherwise noted.