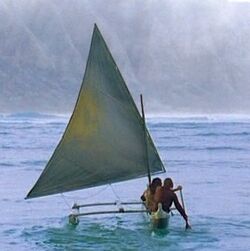 First seen
"Not in Portland"
Last seen
"The Candidate"
{{{Listen}}}
Appeared in
{{{Appearances}}}
Owned by
Others
Found by
{{{Found}}}
Used by
{{{Used}}}
Status
One on Hydra beach, two docked at the main Island

The outrigger canoes are wooden dugouts with wooden outriggers that are used in the waters around Island. They are large enough to comfortably hold at least six people and contain enough oars for that many.

First seen in "Not in Portland", one of the canoes was used by Kate, Sawyer, and Karl to escape Hydra Island.

Alex told Kate and Sawyer she had a boat to help them escape Hydra Island, but she would only let them use it if they rescued her boyfriend, Karl, first. After they rescued Karl and returned to the beach, they were accosted by Pickett, who was shot and killed by Juliet. Juliet then said she would let Kate, Sawyer and Karl go, but that Alex must stay behind, claiming they both knew her father would never let Karl live unless Alex returned to the second island. Alex said goodbye to Karl before he left with Sawyer and Kate for the main island. ("Not in Portland")

Karl later utilized the outrigger to travel to the survivors' beach camp to warn them Ben was planning to attack them earlier than expected. Charlie and Desmond also took the craft for their mission to the Looking Glass station. ("Greatest Hits")

The outrigger was used by Desmond to return to the beach to inform the group of Charlie's fate and his message. ("The Beginning of the End")

Ben was aware of three canoes close to the Hydra Island beach after Flight 316 crashed there. Frank Lapidus and Sun left in one of them during the first night. ("Namaste")

(Somewhere during that time the Man in Black, pretending to be the resurrected John Locke, arrived on Hydra Island, probably in an outrigger from the main island.)

Locke and Ben took the second of the three canoes to travel to the main Island, where they docked it in front of the first one, before meeting up with Sun and Frank at the Barracks. Frank left the Barracks sometime later, presumably using one of the two docked canoes. ("Dead Is Dead")

After subduing Frank, Ilana's group paddled a canoe to the main Island, bringing with them Frank again and a giant metal crate from the cargo of the plane. ("The Incident, Part 1")

A pair of outriggers were found at the abandoned beach camp on the main Island by the timeshifted Sawyer, Locke, Faraday, Charlotte, Miles, and Juliet. Inside one of the canoes, Sawyer found a water bottle with an Ajira Airways label on it. When they realized the Zodiac was missing, the party took one of the canoes to travel to the Orchid; soon thereafter, paddlers in the other canoe pursued them and shot at them. They skipped through time again before the other boat could catch up and the attackers could be identified. ("The Little Prince")

On a reconnaissance mission, Sawyer used an outrigger canoe to go to Hydra Island and back to the Island. ("Recon") The Man in Black then took it with Sayid to Hydra Island again, to confront Charles Widmore and reclaim Jin. ("The Package")

Later, Jack woke up in one of the outrigger canoes to find that Sayid and the Man in Black had brought him to Hydra Island. ("The Candidate")

Retrieved from "https://lostpedia.fandom.com/wiki/Outrigger_canoes?oldid=1112439"
Community content is available under CC BY-NC-ND unless otherwise noted.