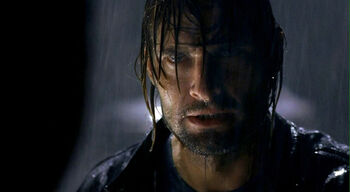 "Outlaws" is the sixteenth episode of Season 1 of Lost. Sawyer becomes convinced that a wild boar has a personal vendetta against him after it ransacks his tent and attacks him in the jungle. Meanwhile, Hurley and Sayid try to help Charlie come to terms with what he did to Ethan. Flashbacks in this episode center around Sawyer's time in Australia and his hunt for the real Sawyer.

As a child, Sawyer is placed under his bed by his mother. She tells him not to come out from under it, no matter what. He lays there and hears a gunshot from outside the room. The door opens, and a man enters. Sawyer’s father sits on his son’s bed and shoots himself.

Years later, Sawyer enters a hotel room with a young woman, named Mary Jo. They kiss, but before they can continue, a man reveals himself. Sawyer recognizes him as Hibbs and ushers Mary Jo out. He threatens the intruder, due to some apparent history between the two. Hibbs offers Sawyer a document to make them “even for the Tampa job." Hibbs explains he has found the "real Mr. Sawyer," the man who conned Sawyer’s parents and caused his father to shoot his mother and then himself. Hibbs tells him the man, now named Frank Duckett, is in Australia.

Arriving in Australia, Sawyer heads out to the harbor to acquire a gun from one of Hibbs’s contacts. The man warns Sawyer that "you never know yourself until you point a gun at a man," and if he finds that he is not the killing type, there is no refund.

Sawyer heads to a shrimp stand, where Duckett is working. He loads his gun and has a perfect opportunity to kill the man. ♪ But after engaging in conversation with the man, Sawyer finds he cannot go through with his plan, and Frank turns around to see nothing but a car driving away. Sawyer heads to a bar, drinking shot after shot, and meets Jack's father, Christian Shephard. The two chat, and Christian mentions his trademark saying, "that's why the Red Sox will never win the World Series." He also talks about his son who hates him, and that Christian is truly more proud of him than his son will ever know. Christian says one phone call to his son could fix everything, but he is too weak to do it. Sawyer says that his business in Australia would ease his suffering, and so Christian convinces him that he must do it.

At night, torrential rain hits as Duckett puts out the trash. Sawyer watches him from his car and pulls out his gun. He walks over to Frank, says “Sawyer,” and shoots him in the chest. He pulls out the letter he has carried since he was a child and begins to read it. However, as he says “Dear Mr. Sawyer,” Duckett’s response of "Who?" causes him to stop. Sawyer realizes that Hibbs has lied to him; Duckett was merely in debt to Hibbs, and Hibbs tricked Sawyer into being his free mercenary. ♪ Before he dies, Frank’s last words are that "it’ll come back around." A stunned Sawyer stares at what he has done.

Sawyer wakes up to find a boar ransacking his tent. He chases it into the jungle, but before he returns he hears whispers. Among them are the faint words "it’ll come back around."

The next morning, Sawyer tries to salvage items from the wreckage left by the boar. Sayid arrives to mock him, and Sawyer asks him about what he heard when he was returning to camp after being kidnapped by the French woman. Sayid speaks about the whispers, but Sawyer shrugs it off when asked if he heard them too.

In the jungle, Kate returns a gun to Jack that she had borrowed. Jack mentions there is just one gun left to get back, and Sawyer has it. While Jack does not mind, Kate is adamant she can get it. Meanwhile, at the caves, Claire tells Charlie that she has started to remember things through dreams about him. Her attempts to reach out to him don't seem to work, however, as Charlie brushes off her offer of going for a walk together.

Sawyer is tracking the boar in the jungle when he once again hears whispers, and again hears "it’ll come back around." The boar then appears behind him, charging straight ahead. Sawyer tries to run, but the boar knocks him to the ground in the mud.

Back at his tent, Kate is enjoying herself as Sawyer tells her about what has happened. He is convinced that the boar is harassing him, and he grabs his gun to take revenge.

Further down the beach, Hurley and Charlie drag Ethan’s body to an area where he can be buried. Hurley asks Charlie if he is all right, but he does not respond. Hurley heads for Sayid’s tent, saying he thinks Charlie might be suffering from post-traumatic stress disorder, as he has recently shot and killed a man.

Kate catches up with Sawyer in the jungle, highlighting his complete inability to track the boar. She offers to help him in return for carte blanche, a blank check. If she wants anything from his stash in the future, she will get it, no questions asked. Sawyer reluctantly agrees. As night falls, the two make camp, and Sawyer offers Kate some liquor from the plane if she will play a game of "I never" with him. The two then ask each other a number of questions, revealing a lot of sensitive facts, such as that Kate was once married. The game ends dramatically, however, as both drink when on the topic of “I never killed a man,” revealing that they both have, at a point in their past. Sawyer says it looks like they have something in common after all.

During the night, Sawyer dreams of his childhood, hiding under the bed. Instead of his father in the room, however, he sees a boar and hears "it’ll come back around" once again.

The next day Kate wakes him up, saying he is shaking. They realize that the camp has been attacked by the boar for a second time, but that it only destroyed Sawyer’s items and left Kate's untouched. Locke finds them, saying he was looking for plane wreckage and thought he would come and say hello. They tell him about the recent events, and Locke talks about a dog that appeared to his foster mother after her daughter died. The pet stayed up with her, sleeping on the daughter’s bed every night until his mother died. Kate asks whether he thought it was his sister, but Locke says what mattered was his mother's belief in it.

Sayid finds Charlie by the shore, and Charlie soon understands why he is there. Charlie says he feels no guilt over what happened, as it was to protect the survivors from an evil man. Sayid tells Charlie about the first man he killed, and how he woke up every night after for a long time before he could accept what he had done. What happened with Ethan will be with Charlie for the rest of his life, and Sayid says that he is not alone, whether he pretends he is or not.

Sawyer and Kate manage to find the boar’s wallow and discover a baby hog. Sawyer waves the boar in the air to attract its parent, much to Kate’s disgust. She shouts for him to let the defenseless creature go, and on his refusal, she kicks his leg, causing him to trip and release the piglet. She tells him to find his own way home and walks away.

Continuing his search, Sawyer finally comes face to face with the adult boar. He pulls out his gun, ready to shoot, but decides he cannot kill it. The similarities between the boar and Duckett in his past are not lost on Sawyer, and when Kate reveals herself again, Sawyer says, "it's just a boar." ♪ He heads back to camp. ♪

At the beach, Charlie finds Claire, offering to take that walk with her now. The two head off along the beach, as Charlie finally confront his feelings about killing a man. ♪ Elsewhere, Jack is chopping wood when Sawyer arrives with his gun. He eventually hands it over, and when Jack says, "that’s why the Sox will never win the Series," Sawyer remembers Christian saying the same thing in Australia. He realizes the son Christian spoke of was Jack, but says nothing. ♪

Retrieved from "https://lostpedia.fandom.com/wiki/Outlaws?oldid=1093514"
Community content is available under CC BY-NC-ND unless otherwise noted.