Start a Wiki
Others 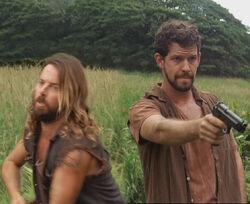 In 1974, two unkempt Others with dingy clothes ambushed Amy and Paul of the DHARMA Initiative, who were having a picnic. When Sawyer, Jin, Juliet, Daniel, and Miles arrived on the scene, Paul had already been shot dead and Amy was being held hostage. The brown, short-haired Other took away Paul's handgun and stuffed it in the back of his pants, then resumed pointing his own handgun at the woman while his friend with the long hair and full beard covered her head with a burlap sack. The first one was shot and killed by Juliet after being told to halt by Sawyer. The second one was shot and killed by Sawyer. Then their bodies were buried, at Amy's insistence, in an attempt to hide their deaths, which violated the truce between DHARMA and the Others. ("LaFleur")

Retrieved from "https://lostpedia.fandom.com/wiki/Others_(LaFleur)?oldid=1106302"
Community content is available under CC BY-NC-ND unless otherwise noted.