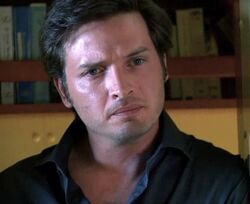 Oscar Talbot was the expedition supervisor aboard the Christiane I in the storyline of the alternate reality game Find 815. Sam Thomas described him as a "real company man," who keeps reminding everyone of his "employer requirements." (Find 815 clues/January 8) Oscar comes from a wealthy East Coast, New England family with a sketchy history in the diamond trade. He has a slippery nature which runs in the family - which is reclusive in a way only a lot of money can buy. They arrived in New England in 1908 from the English county of Somerset. (Find 815 clues/January 9)

When Mr. Ockham informed him that the expedition would be delayed due to a broken chart plotter, Talbot told Ockham that was unacceptable, and that his employer's requests were made clear. After Sam Thomas successfully fixed the equipment and was granted a spot on the ship, Talbot questioned Sam as to his interest in the Sunda Trench, suggesting that perhaps Sam was running away from something. Ockham told Talbot that they needed Sam on board, as the destination might be hazardous to the electrical equipment. Talbot consented, adding that he would install security measures. (Find 815 clues/January 7)

One time, Sam noticed Talbot leaving his room. Talbot seemed to be short of breath and covered his nose with a handkerchief. Taking his chance, Sam searched Talbot's room, and found out that Talbot was working for The Maxwell Group. A confidential research brief from the Maxwell Group, entitled "Proposed Salvage of 'The Black Rock' Shipwreck," showed that the Maxwell Group is a division of Widmore Industries. As Sam left the room, Talbot spotted him and questioned him why he was in there. Sam lied that he was just closing the door for him. Talbot then accused Sam of looking for something, suggesting that it was something other than the Black Rock. (Find 815 clues/January 14)

Not much later, Talbot's suspicions were confirmed as he found out that Sam was entering specific coordinates in the presumably broken chart plotter. He warned Sam once again, that he had no idea what he was involved in or who he was dealing with. When Sam confessed that someone from Talbot's employer - the Maxwell Group itself - gave him the coordinates, Talbot just smiled and told him to stay away from those coordinates. (Find 815 clues/January 21). To Mr. Ockham Talbot claimed that the coordinates were found by Sam in his cabin and were insignificant. Reportedly they were just one set of hundreds of other entries, recorded by Magnus Hanso in the Black Rock's journal which was in possesion of Talbot's employers. (Find 815 clues/January 28).

For fan theories about these unanswered questions, see: Oscar Talbot/Theories

Retrieved from "https://lostpedia.fandom.com/wiki/Oscar_Talbot?oldid=993720"
Community content is available under CC BY-NC-ND unless otherwise noted.