Start a Wiki
"One of Them" 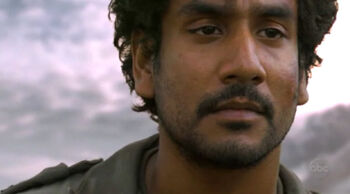 "One of Them" is the fourteenth episode of Season 2 of Lost and the 39th produced hour of the series as a whole. Sayid is sought by Rousseau after one of her traps captures a mysterious man, leading to conflict over whether he should be treated as an enemy or not.

In an Iraqi bunker during the first Gulf War, as bombs fall around them, a Republican Guard commander, (Tariq) urges his soldiers to keep destroying documents. The door is kicked in and American soldiers capture the Iraqi soldiers. Their NCO wants to know who is in charge. One of the new prisoners speaks English: Sayid. When Sayid says there is no commanding officer present, the soldier senses Sayid is lying, and knocks him out with his rifle's butt. Sayid is taken aside by another soldier, Kate's father, for questioning and asked where the commander, Tariq, is. But Sayid, as a loyal member of the Republican Guard, tells the Americans that Tariq fled to Hillah long before they arrived. The Americans lead him into a room, where he finds Tariq, tied to a chair in front of him.

Sayid is used as translator for the interrogation of his own commanding officer. The Americans are looking for a missing helicopter pilot and they know Tariq can lead them to him. Tariq refuses to cooperate, ordering Sayid in Arabic to steal the guard's gun and shoot as many of the Americans as he can. Sayid doesn't do this, but tells the Americans simply that Tariq doesn't have their answer.

Sayid is introduced to a man who tells him it is very important they find the missing helicopter pilot, but he knows Tariq will never talk to him. He plays a DIA video tape, which shows a village of people dying from a sarin gas attack that was ordered by Tariq. The man knows that Sayid had family in that village. Sayid, feeling betrayed, agrees to interrogate Tariq. The American officer hands Sayid a large box. ♪

Sayid begins to interrogate Tariq, who is incredulous that Sayid is working with the Americans. After a period of time, in which Sayid interrogates and tortures Tariq, he walks out of the interrogation room, and has the information from Tariq: the American pilot was executed 2 days ago. He hands the box to the American officer. His hands are bloody.

Sayid is in the back of a military transport with several soldiers, one of whom, Sgt. Austen, holds a picture of a young girl. Sayid is driven down a deserted road in the Iraqi desert. Inman takes Sayid out of the transport, telling him the Americans are pulling out of Iraq. He says he thinks Sayid is lucky now that he gained a new skill that he can use. Sayid tells him he would never torture anyone again. Inman suddenly begins speaking in Arabic, telling him that one day, there will be something he will need to know - and now he knows how to get it. Inman hands Sayid the box, gives him $1000 to get back to Ramadi, and leaves. ♪

On the Island, Ana Lucia comes to Sayid and tells him she saw "one of them" near the camp. She and Sayid track the person, but Sayid recognizes the person as Rousseau. He tells her to go back to their camp, and orders her not to tell anyone about what she saw. Sayid jumps in front of Danielle, asking what she is doing here. She says that she is looking for him.

She leads him through the jungle to a clearing, where there is a man hanging in a net from a tree and calling for help. He claims to be Henry Gale, from Minnesota. Danielle warns Sayid not to free him, and tells him he should not believe any word Henry says. Sayid cuts him down, and as Gale tries to escape, Rousseau shoots him in the back with a crossbow, purposely missing his heart. She is convinced that Gale is an "Other," and she tells Sayid to take him back to their doctor. Sayid ties him up, and she tells him that Gale "will lie, for a long time... he will lie." ♪

Meanwhile, Sawyer is irritated by the loud chirping sounds made by a tree frog. Sawyer asks Jin if he hears it too, but Jin does not answer, angry after what happened previously. He heads off into the jungle and comes across Hurley, eating from his personal stash of food. Sawyer says he will not say anything to anyone about Hurley's hidden stash if Hurley helps him find the frog. During their trekking journey, Sawyer keeps calling Hurley in different nicknames, each one of them has something to do with Hurley being overweight. Hurley's temper eventually heats up and he tells Sawyer that even though he is fat, people still like him, while nobody likes Sawyer. Sawyer apologizes and Hurley decides to continue the journey with him. Eventually, Hurley and Sawyer find the frog. Hurley tries to reason with Sawyer promising to take the frog to another part of the island, but Sawyer crushes it in his hand.

In the Swan, Sayid wakes Locke up and tells him Gale's story. Sayid tells Gale he has to calm down, and then asks him some questions. Gale claims to have crashed his balloon on the Island, that his wife died after she got sick, three weeks ago. According to Gale, they were staying in a cave off the beach. Jack arrives and removes the arrow from Gale's shoulder. Sayid takes Locke aside and convinces him to change the combination on the armory door so that he can interrogate Gale without Jack's interference. They trick Jack into bringing Gale into the armory, and Sayid shuts the door as Jack and Locke walk out. While Jack is banging on the door asking Sayid what he is doing, Sayid replies quietly "what needs to be done."

Jack and Locke argue about the combination on the door and Jack's plans to start an army. Locke says that Jack raised an army because they are at war so whatever Sayid is doing with Gale is part of it too. In the armory, Sayid questions Gale about his life on in island on the last four months. He also asks about his wife, and Gale reveals she died when she suddenly got sick. He says it started as a fever, and after two days she was delirious and died. He asks to know who Sayid is, so Sayid tells him about his military career, about the things he did he wishes he could erase from his memory. He introduces himself with "My name is Sayid Jarrah, and I am a torturer."

Jack is cleaning up Gale's blood, and argues more with Locke. Sayid continues his interrogation about the balloon and Gale's wife. Gale claims that he "was rich", after he sold his non-metallic minerals mining company. Sayid asks about his wife's grave: the location, "How deep? How many shovelfuls of earth? Did you use your hands? How long did it take you?" When Gale does not know what to answer, Sayid becomes violent, and begins beating him severely. Sayid claims he would remember how deep that grave is, if he would really have buried the woman he loved. He would remember - if it were true. Gale asks if Sayid lost someone he loved on the Island, and Sayid only says that it was an accident, and that the woman who accidentally killed her thought she was "someone who wants to hurt us, someone like you [Gale]."

Sayid punches Gale in his face over and over, while Gale begs him to stop. Gale's screams lead Jack to force Locke to open the armory door, just as the timer begins to sound. Jack says if Locke would not open the door, he will not let Locke push the button. Locke does not believe Jack will risk everybody's life on the Island, but Jack says he does not believe anything will happen if the button is not pushed. Locke eventually opens the door, and rushes to enter the code and push the button, but his fingers trip over themselves and does not get them entered in time.

As the timer hits zero, hieroglyphs appear in place of the Numbers, and what sounds like a generator begins to fire up. Locke finally enters the code, and presses the button. The sound dies down and the timer returns to 108. Meanwhile, Jack stops Sayid beating Gale, but Sayid is convinced that Gale is one of them, although his reasoning does not satisfy Jack.

Gale thanks Jack and before the armory's door is closed on him, shows some kind of a smile.

On the beach, Sayid is telling Charlie his story, and claims that he knows Gale is an "Other" because he felt no guilt for what he did. He tells Charlie that it seems everybody has forgot what the Others did to them -- how they abducted Claire or how they hung Charlie from a tree.

He asks Charlie if he too, has forgotten. ♪♪

The Season 2 soundtrack includes the episode's closing music as "A New Trade", the first statement of "Sayid's Theme" to appear on a soundtrack release.

For fan theories about these unanswered questions, see: One of Them/Theories

Retrieved from "https://lostpedia.fandom.com/wiki/One_of_Them?oldid=1113653"
Community content is available under CC BY-NC-ND unless otherwise noted.