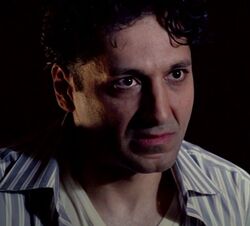 One day in his childhood, his father approached him and requested that he kill a chicken on his own as a way to prove his maturity. Omer hesitated and held the cleaver for a while unwilling to proceed. Sayid then approached him and wrung the chicken's neck in front of him. Their father initially thought Omer killed it and appreciated him, but when he knew it wasn't him, he critically remarked that at least one of them was going to be a man and proudly congratulated Sayid. ("He's Our You")

Omer lived in the United States and was married to Nadia Jazeem. The couple had two children. Omer was a businessman who owned at least two dry cleaning stores, but to finance his latest store he borrowed money from a loan shark. In September 2004, he asked Sayid to intimidate his creditors into leaving him alone, because he knew that as an interrogator for the Republican guard, Sayid had certain skills. Later he was beaten severely by the men he owed money, causing him to be hospitalized with a collapsed lung. ("Sundown")

Retrieved from "https://lostpedia.fandom.com/wiki/Omer_Jarrah?oldid=1086052"
Community content is available under CC BY-NC-ND unless otherwise noted.