This article is about the mercenary. For the character from Sayid's flashback, see Omar (Solitary). For Sayid's brother, see Omer Jarrah. 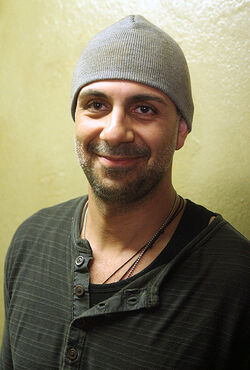 Omar Idris was one of the mercenaries sent by Charles Widmore to the Island aboard the freighter Kahana. According to Keamy, he was originally from Florida. He and Keamy have been seen to communicate using only glances, thus indicating that either Omar has tactical experience or has worked with Keamy prior to being hired by Widmore. ("The Constant")

Omar and the rest of the mercenaries were killed on day 100 by the Others during the helicopter ambush. ("There's No Place Like Home, Part 2")

Omar and other mercenaries shot skeet with automatic weapons from the deck of the Kahana. ("Meet Kevin Johnson")

Upon Frank, Sayid, and Desmond's arrival on the freighter, Keamy and Omar escorted Desmond down to the sickbay. Omar informed Desmond that they only knew they were somewhere in the Pacific Ocean with no more knowledge of their whereabouts. Later, Keamy and Omar returned to sickbay having been called by the doctor's emergency alarm. The pair quickly subdued Frank, Sayid, and Desmond, taking the satellite phone from Desmond and once again locking Sayid and Desmond in the sickbay. They then took Frank to speak with the captain. ("The Constant")

Omar was part of Keamy's strike team that assaulted the Island. Upon return of the helicopter to the freighter, Omar helped to unload the injured Mayhew and stood guard over Sayid and Desmond. On his way to the armory upon Keamy's request, Omar received Faraday's Morse code message on his satellite phone. After strapping a device to Keamy's chest, he helped to load up the helicopter and informed Ray about the message sent from the beach.

Omar also made his gun accessible to Keamy, who used it to kill Captain Gault. ("Cabin Fever")

He later patrolled the Orchid station with Keamy and the other mercenaries on the Kahana, holding a gun to Ben as Ben surrendered himself. ("There's No Place Like Home, Part 1")

Omar and the other mercenaries escorted Ben back to the helicopter, where they were ambushed by the Others. One of the Others threw a grenade at the helicopter, but when Keamy kicked it away, it landed at Omar's feet and exploded, throwing back and killing the surprised Omar. ("There's No Place Like Home, Part 2")

Omar was a man who worked for Martin Keamy. He was killed by Sayid Jarrah when he was helping Keamy threaten him. ("Sundown")

Retrieved from "https://lostpedia.fandom.com/wiki/Omar?oldid=1114801"
Community content is available under CC BY-NC-ND unless otherwise noted.